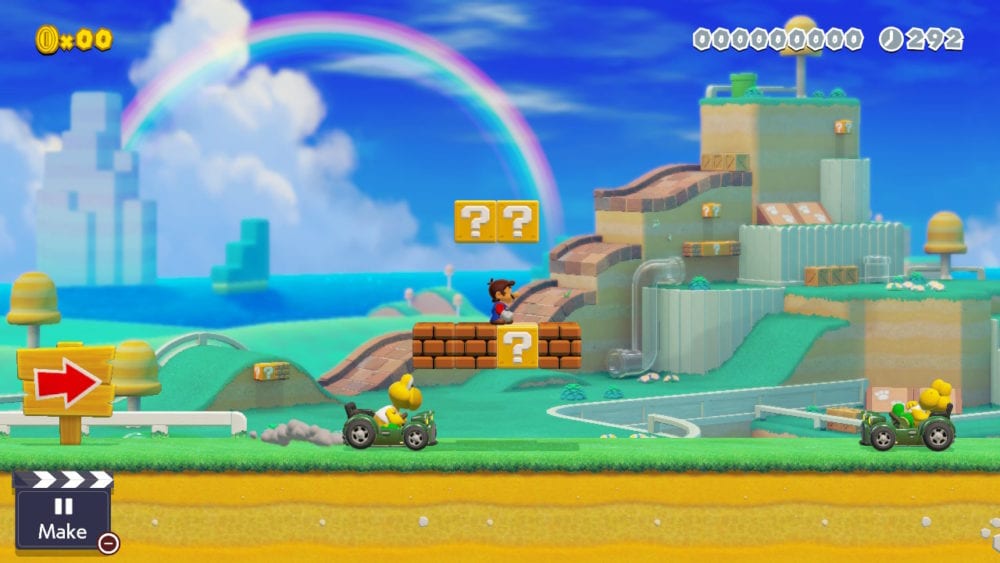 When you think Mario, you don’t typically think of vehicles. But, Super Mario Maker 2 already turns typical Mario conventions on their head, so you might as well go crazy with cars all over the place. Here’s how to place enemies in vehicles in Super Mario Maker 2.

How to Place Enemies in Vehicles in Super Mario Maker 2

Whether it’s a car or an airborne vehicle, you can place an enemy inside of it. Better yet, if you defeat the enemy inside the vehicle, then Mario will get to commandeer it. This enables multitudes of level design options that you would normally never see in a Mario game.

Here are a few different modes of transportation you can give to Bowser and his underlings.

The Koopa Car, available only in the 3D World style, is the newest vehicle addition to Super Mario Maker 2. This green jeep can make quick work of a level with its speed.

Koopa Troopas will be in the car by default, but Mario can also commandeer the vehicle. Those little turtles used to be so slow, but the Koopa Troopa Car gives them the speed they need to finally chase down Mario. Just jumping on them will kick them out of the driver’s seat to let Mario take the wheel.

Your instincts probably tell you that you’ll see some spiny shells when an enemy comes swooping down in one of these, but Super Mario Maker 2 sort of gives you some rest. You can drag and drop just about any enemy onto a Lakitu Cloud to get it on there.

Put a Fire Piranha Plant on the cloud and you’ll spawn brand new nightmares for Mario fans. That relentless beast won’t stop until Mario is burnt to a crisp.

The classic Koopa Clown Car returns in this game and it’s just as dangerous as ever. Sure, Bowser can do some damage in there, but drag and drop a Chain Chomp into the machine and you’ll have a recipe for disaster. It’ll chase Mario all around the stage until you can find a way to defeat it or finish the level.

That’s everything there is to know about how to place enemies in vehicles in Super Mario Maker 2. If you want to create levels filled with airborne enemies, check out our flying enemies guide, or search for Twinfinite.