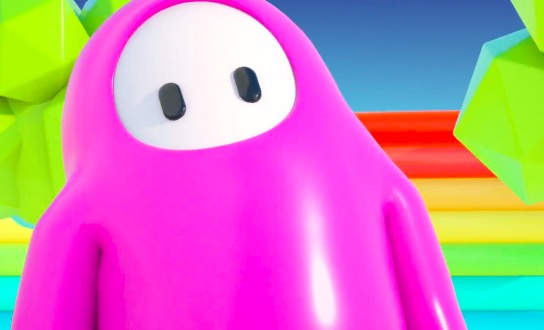 Here’s what the description on the official YouTube page has to say about the game:

Fall Guys: Ultimate Knockout flings hordes of contestants together online in a mad dash through round after round of escalating chaos until one victor remains! Battle bizarre obstacles, shove through unruly competitors, and overcome the unbending laws of physics to avoid both humiliation and elimination. Leave your dignity at the door and prepare for hilarious failure in your quest for the crown!

The vibrant trailer shows that it’s self-aware of the battle royale genre but it also seems to be taking a more light-hearted approach to an already saturated genre.

During the trailer we also see these colorful characters with floaty physics, avoiding various obstacles and perils that can eliminate them from the match.

It seems that the objective of most matches will be running towards a crown somewhere on the map that players will compete to get to.

Fall Guys: Ultimate Knockout will be coming to PlayStation 4 & PC in 2020. If you happened to miss the trailer during the E3 Devolver conference, feel free to view it down below:

For more on E3 2019, keep it locked here at Twinfinite. We will have more news, features, trailers, and reveals as the week goes along.
Comments
Continue Reading
Related Topics:Devolver Digital, Fall Guys Ultimate Knockout