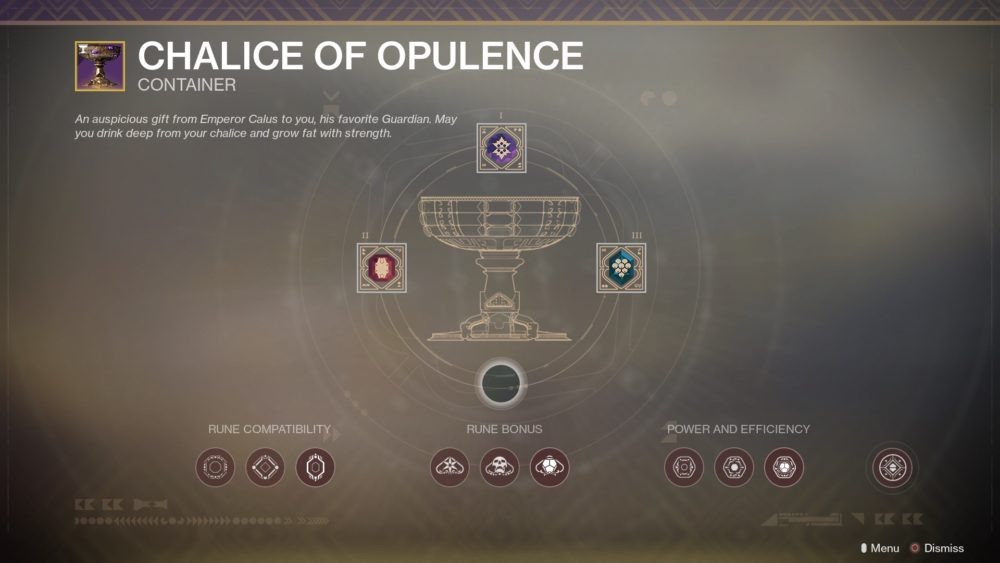 Destiny 2’s Season of Opulence has arrived and with it comes the arrival of an exciting new feature called the Chalice of Opulence. This new pursuit container allows players to customize their own rewards to their liking. First, you’ll need something called Runes to actually begin that customization process. Here’s how to get runes in Destiny 2 for your Chalice of Opulence.

Getting More Runes in Destiny 2

Before you get ahead of yourself, make sure that you have progressed far enough into The Invitation quest line. The whole quest serves as an introduction to the Chalice of Opulence pursuits, inserting runes, etc. However, inserting runes is towards the end of that quest.

Additional runes beyond the one you start with are obtained through a number of different ways. Completing weekly bounties from Werner at the new Nessus Barge will reward you with runes for each one that you complete.

Make sure to clear as many as you have time to do to keep a constant flow of gear coming.

After that, you can purchase the Runefinder consumable if you have the spare Legendary Shards, to give you a chance of obtaining a new rune by completing either a Crucible, Gambit, or Strike.

Once you progress far enough, you’ll also get a weekly chest on the Nessus Barge that will also reward you with a rune.

Finally, perks from the Chalice of Opulence screen that you unlock via Imperials will increase and preserve the Runes you obtain from certain sources such as weekly Menagerie and Werner bounty challenges. Let’s get to those perks actually now that we’ve discussed them in some detail.

By upgrading your chalice using Imperials, the new currency added in Season of Opulence (check out this guide for how to get them), you can gain further control of your Chalice of Opulence and obtain more runes to mess around with. Initially you only start with the purple rune and cannot customize any further than just guaranteeing yourself a certain weapon.

You can fine tune your experience though a lot once you’ve played bunch of the new Season of Opulence content AKA completing the weekly bounties and participating in the Menagerie.

By entering the Chalice of Opulence screen in your new pursuits tab on the Destiny 2 director, you can see all the options that you have available to you and  what you need to get them.

For example, for 2,500 imperials you can unlock the Rune Compatibility I perk, which allows you access to Red Runes which unlock the ability to craft arm and leg armor and power weapons. Note that certain upgrades aren’t allowed to be purchased until you’ve progressed far enough into the opening quest and have also obtained certain prerequisite perks from the Chalice of Opulence screen.

It might seem a bit overwhelming at first but it will eventually come naturally once you progress far enough into the quest. Start by just completing all of your bounties, and getting to 690 power level so you can do your first Menagerie run.

Once you’ve gotten a feel for that, all the terminology we discussed here will make more sense.

That does it for how to get more runes and upgrade your Chalice of Opulence in Destiny 2. If you’re still confused about anything be sure to reach out to us in the comments below.