While Black Armory excelled in adding midcore PvE content and Season of the Drifter expanded Gambit in a meaningful way, expect Season of Opulence to deliver even more PvE content, especially for hardcore players.

Fans of the game’s lore should also be stoked as this content update will serve as a bridge from Forsaken to the next chapter of Destiny 2’s story. First, though, let’s start with what many players will be wrapped up with tomorrow.

For the first time in quite a while, Destiny 2 is launching the raid on the same day as a content update. Crown of Sorrows will be live right away whenever the patch is fully downloaded, installed, and live on your console.

Generally, the raid comes a week after to give players some time to dive into the story and get their power level up.

However, the raid and the continuation of the Calus plot (more on that in a bit) is arguably the main event of this update, so Bungie is letting loose and allowing players to dive right into giving the raid a go as soon as everything is live tomorrow.

Crown of Sorrows will have players exploring, and ultimately clearing out, an infestation of the Hive at the Leviathan. Not much else is known at the moment, as is usually the case until the raid is actually out.

A very small percentage of raid teams will be going for world first. Expect to see some familiar faces such as Datto’s Math Class team, Gigs, Gamesager and other popular streamers high up on Twitch as they race for the championship belt for Crown of Sorrows 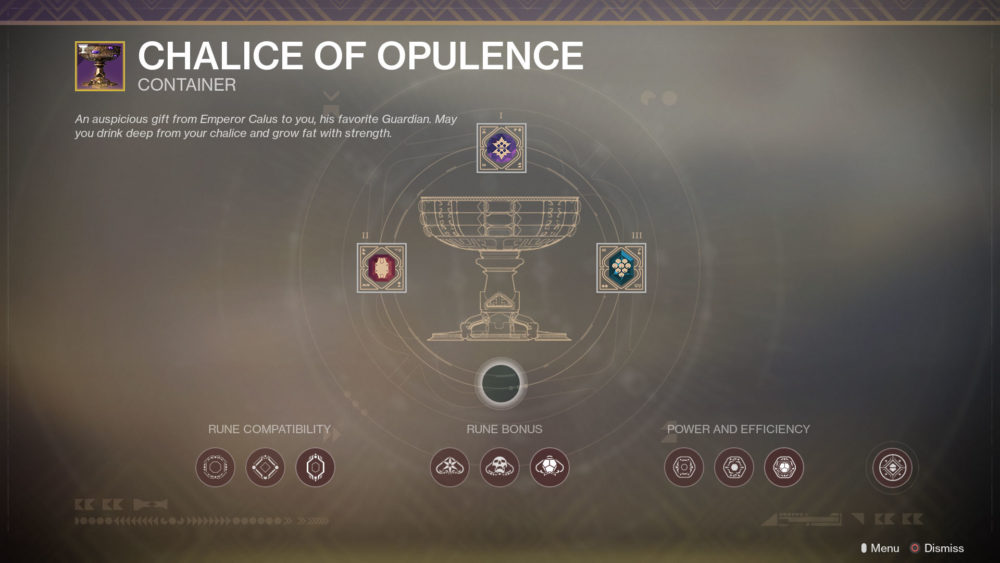 The Menagerie is a new six-player matchmade activity which will also feature a unique reward system that appears to be an evolution of what was well-received from Black Armory.

Like the raid, we don’t know a ton about the Menagerie other than it will take place on an “unexplored deck” of Calus’ ship, the Leviathan. A new “Imperial Summons” quest will power surge you up to 690 so you can quickly jump into this new PvE content.

Just like how content was teased out during the last two seasons, new bosses will be added through the month of June and by the time July rolls around, the Solstice of Heroes event will take the baton and carry Destiny 2 into whatever Bungie has planned for Year 3.

By playing through Season of Opulence content, such as the Menagerie, you’ll unlock nodes in a new container known as the Chalice of Opulence.

This new inventory item will allow you to choose the type of gear that you earn from these events and fine-tune its perks to your liking.

You earn something called runes, which you’ll get from completing weekly bounties, opening weekly chests on the Nessus Barge, and as a reward from certain consumables. You can then place these on nodes of your choosing (see picture above for an idea).

Once placed, head into the Menagerie and when successful, you’ll be rewarded gear based on the runes you selected.

At first, you don’t have total control. However, as you upgrade your Chalice throughout the season by earning a new currency called Imperials (obtained similarly to the runes), you’ll unlock new ways to further narrow down your rewards right down to details such as the type of gun and masterwork stat that you want. 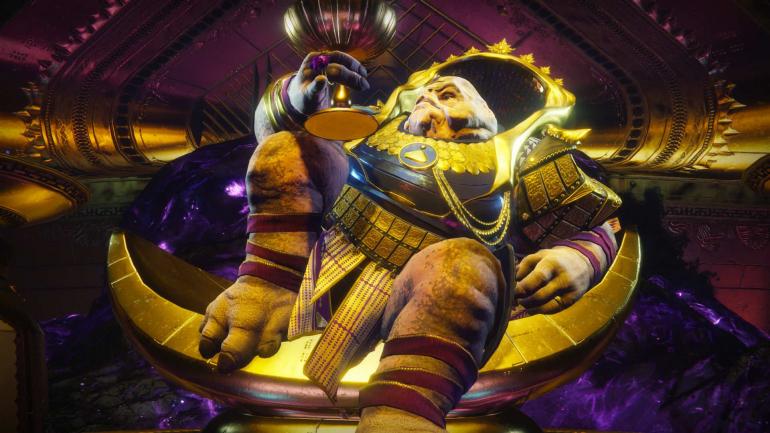 More so than either of the last two seasons before it, Season of Opulence is being built up to have the story be more in the limelight for the first time since Forsaken.

We don’t expect the value to be as high as it was in Forsaken but the return of Calus is significant to anyone that played during Year 1 of Destiny 2, and it’s extremely likely that whatever path Season of Opulence takes us down story-wise will likely be tying up everything that has happened so far, to prepare us for whatever is next.

Just today, the day before the update goes live, Bungie has been posting cryptic lore snippets on their blog: Cabal “Loyalist” Band Transmission and “Am I To Cast a Shadow” which is certain to hype up fans of the ol’ Grimoire and tool tip readers. 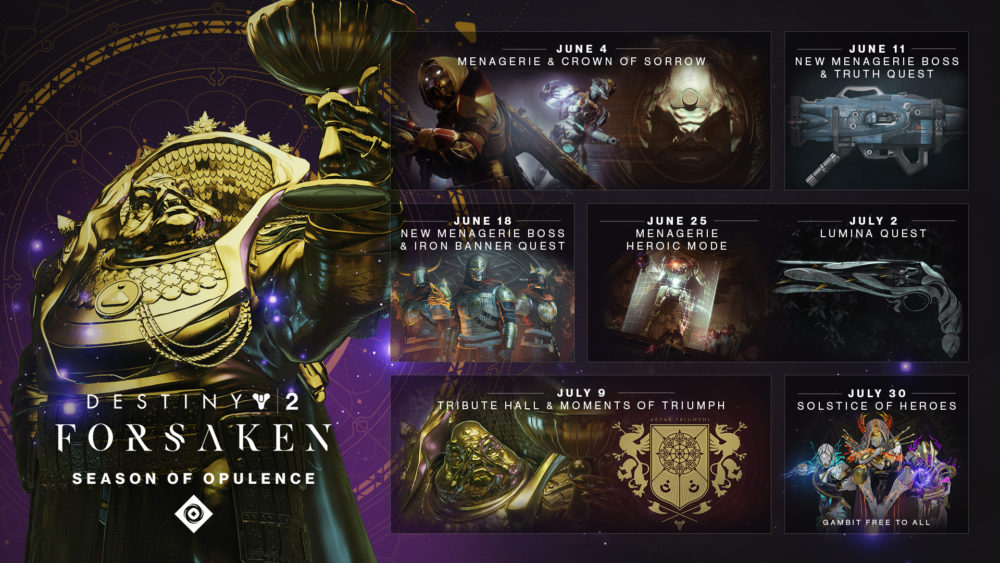 There are two exotic quests that we know of that are definitely going to be coming in Season of Opulence. One will feature a returning Destiny 1 weapon, and the other… yet another Hand Cannon.

Truth makes its triumphant debut to Destiny 2. The exotic rocket launcher was well known in Destiny 1 for being a powerful void launcher with a comical amount of homing capability. As long as your locked on properly, it was pretty much impossible to miss. Expect it to be quite popular in the Crucible at the very least. The quest will go live on June 11.

The other gun is Lumina a new exotic Hand Cannon that will be released on July 2. Not much else is know about Lumina at the moment but perhaps we’ll learn more once the game is updated tomorrow.

While there’s no confirmation of this, there’s at least a possibility of another Outbreak Prime-style surprise exotic quest releasing sometime this summer. Bungie hasn’t said anything, and they likely won’t until it’s discovered, but considering how well-received the quests for Whisper and Outbreak were, it’d be surprising if they don’t do it again sometime in the near future. 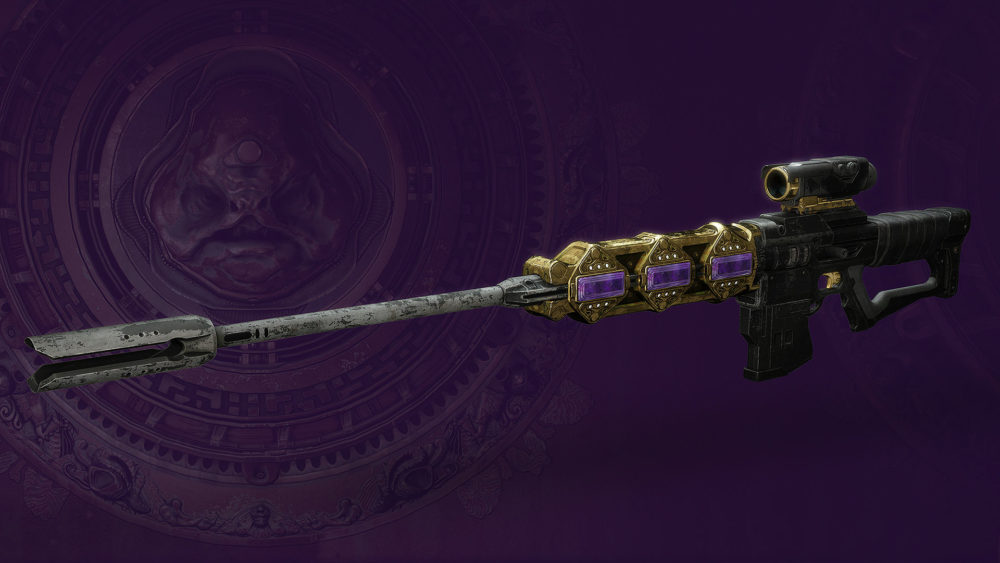 That’s all the flashy stuff but there’s still lots of content going live for all players by way of Season of Opulence that doesn’t necessarily tie directly to the premiere content.

There’s going to be new pinnacle weapon quests including: Wendigo-GL3 (Vanguard) a grenade launcher that lets you power up your damage via Orbs of Light, Revoker (Crucible) a sniper rifle that refunds missed shots, and Hush (Gambit) a Combat Bow that gives you dramatically increased draw speed for a duration after a hipfire kill.

Legendary fusion rifles are (finally) getting a massive buff in PvE to make them actually worth using again, Swords are getting increased ammo reserves, and Sturm and Drang are getting a buff too; the Overcharge damage is being doubled and there’s a whole new version of Drang that will be released in Season of Opulence.