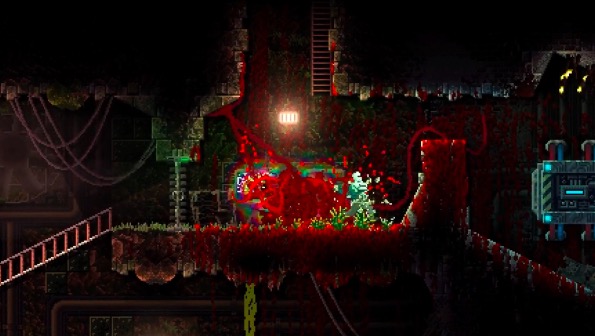 In Carrion, you assume the role of an amorphous creature of unknown origin. Stalk and consume those that imprisoned you to spread fear and panic throughout the facility. Grow and evolve as you tear down this prison and acquire more and more devastating abilities on the path to retribution.

By “reverse horror”, you as the player control a monster that hunts down and eviscerates horrified human NPC’s, who flee and desperately try and fend you off. It’s an interesting twist on the norm and looks to be reminiscent of such horror classics as John Carpenter’s The Thing.

In the trailer, the otherworldly creature is shown using t abilities such as active-camo and even using its own appendages to move around like a horrific Spider-Man clone gone wrong.

Over the course of its rampage, the creature is shown to have dramatically grown in size and ferocity. It initially seems about the size of an octopus, but by the end of the trailer it is filling whole corridors and taking down multiple foes at once.

Check out the trailer for yourself below. Carrion is coming to consoles and PC in 2020.