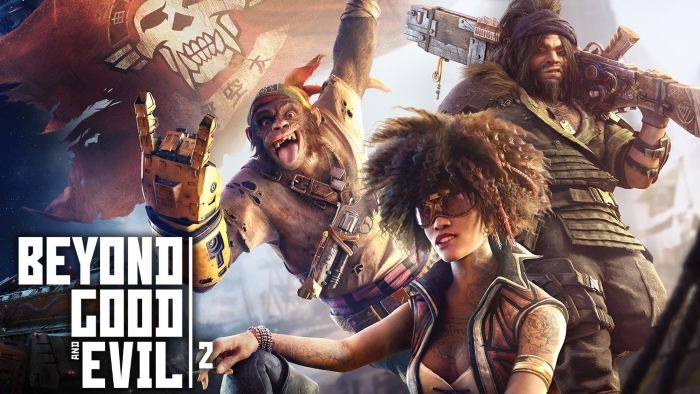 Today, Ubisoft hosted a new livestream on Beyond Good and Evil 2, providing new information, artwork, and footage on the upcoming game.

We hear that 620,000 fans joined the game’s Space Monkey Program, and they will be given the chance to be the first to get their hands on the game when it’s ready.

The development team is growing and currently, there are five studios working on the game: Ubisoft Barcelona, Bordeaux, Mainz, Montpelier, and Sofia. A sixth studio will soon join the party. Ubisoft Montpelier itself will move to a brand new office in the next few days.

We get to see concept art of the laboratories where Chimera Corporation creates clones. Everyone in System 3 is a clone as there is no natural birth in the world. Scientists create hybrids by crossing human and animal DNA.

One of the game’s main themes is the contrast between predetermination and free will. Everyone is being created like a product including the (playable) hybrid monkeys who make very good slave miners.

More artwork shows a corporate ship flying over Naraka, with giant rocky formations created by meteorite impacts. Miner slaves are air dropped with meteorites hitting all around them trying to pick up a mineral named Diwalite that is generated upon impact. It’s very volatile so it needs to be grabbed immediately or it disappears. The miners wear large gloves for limited protection, but they’re completely disposable and can be abandoned if they don’t meet their quota.

Getting hit by the impact between a meteorite and the sulfur fields means being turned into a crumbling sulfur statue. There are rumors that some of the slaves managed to get away and find refuge in shelters.  Pirates can sneak in and rescue them to recruit them for their crew.

We then see a pirate ship flying in space and approaching the biggest pirate lair in the system, hidden in an asteroid field. Once the players reach that lair, they’re initiated into the pirate life by an ancient AI named Primera. She knows the truth about the system and she can tell fledging pirates everything they need to know.

Players can also feed knowledge back to her to share it with the community as they progress and explore. You can check all the images out in the gallery at the bottom of the post.

Last, but certainly not least, we also get the reveal of the new Mammago, who will be a very important character in the new game. She was presented alongside a video look at the 3D Models of the hybrid rhinos, who are also often used as slaves and are fully playable like the hybrid monkeys.

Beyond Good and Evil 2 doesn’t yet have announced platforms or a firm release window. If you want to see more, you can enjoy a previous gameplay video.