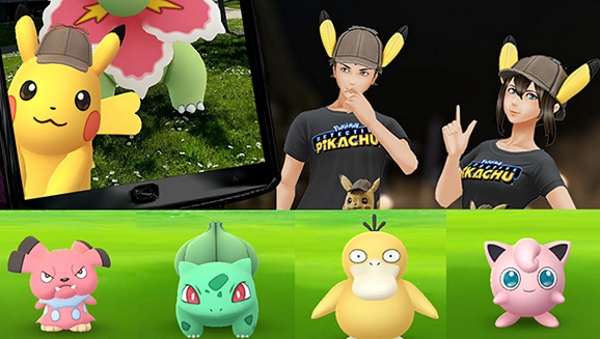 Pokemon GO is celebrating the launch of the upcoming Detective Pikachu film with special features and themed items in-game for a limited time.

Starting tomorrow, May 7, Pokemon GO players will have an increased chance to catch several Pokemon heavily featured from the movie, such as Aipom, Shiny Aipom, Bulbasaur, Jigglypuff, Psyduck, and Snubbull.

Players will also receive double XP for every creature caught during the event, not just the list with increased encounters above.

To coincide with the film, a Pikachu with a detective hat can be caught in Pokemon GO through an unorthodox method. The hat-wearing pocket monster will be photo-bombing players’ GO Snapshot photos, and will give a chance a to catch it when it happens.

Other features during the event include Raid Battles with those found in the film, “movie-inspired” Field Research, and a Detective Pikachu-themed t-shirt alongside a detective hat with Pikachu ears located in the Style Shop for players’ avatars. Check out the clothing and other event features in the trailer below.