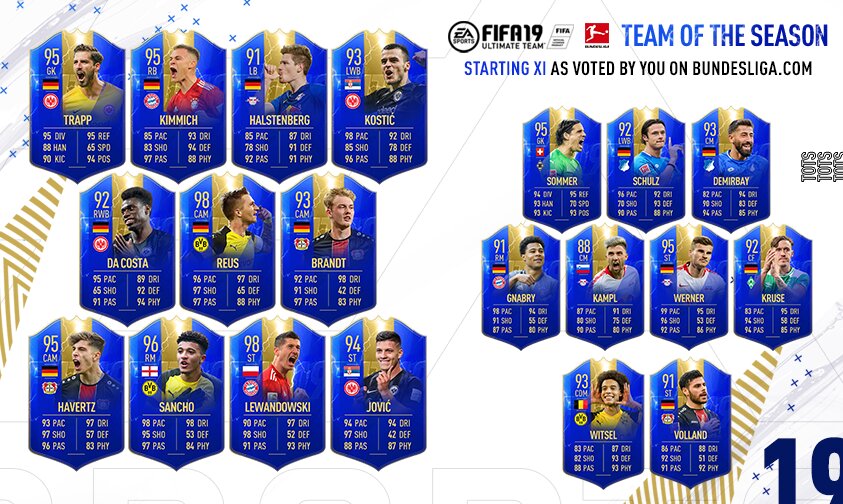 The most exciting time of each FIFA cycle has arrived. We’re in the third week of Team of the Season it’s time for Bundesliga and Liga Nos. As they have for previous promo events, EA Sports has made players available from Weekly Objectives. Here’s everything you need to know about how to get the Bundesliga and Liga Nos TOTS Weekly Objectives players in FIFA 19 (Hazard, Eggestein, Brahimi).

A full squad of 20 Bundesliga Team of the Season players, and 11 Liga Nos players, have been released into packs, and some will be available via SBCs throughout the week. There are three obtainable by simply playing the game.

The Thorgan Hazrd one is the Weekly Objective that you’re going to want to complete first. The best thing to do is to slot a Belgian player into your main FIFA 19 team so that you’re not weakening yourself much. If you’ve got a Premier League team, just buy Kevin De Bruyne or someone. Alternatively, you can sub them on.

The other two are pretty simple. You are able to sub on some better players for the Liga Nos Objectives, so be sure to do that. Also, it might be better to use one German player in your good team for the Eggestein, rather than building a bad, full German team.

That’s everything you need to know about how to get Bundesliga and Liga Nos TOTS Weekly Objectives players in FIFA 19 (Hazard, Eggestein, Brahimi). For more tips and tricks on the game, be sure to search for Twinfinite.