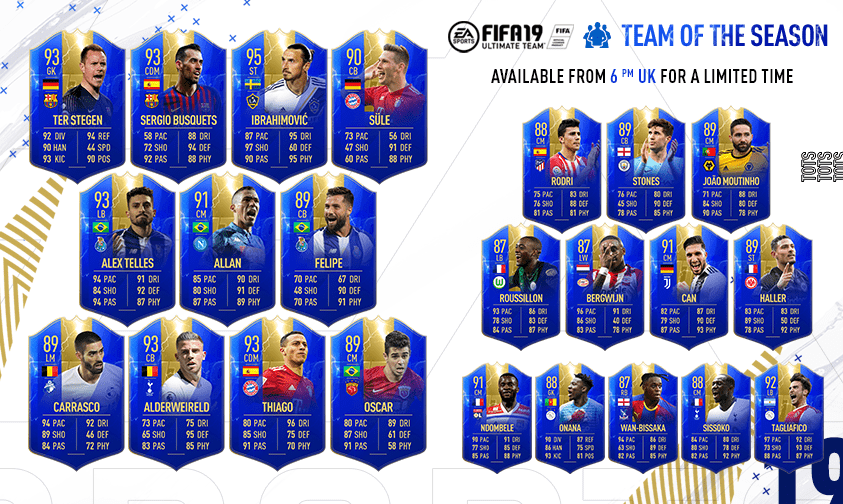 Many FIFA fans’ favorite promo event of the year, Team of the Season, is here but EA Sports hasn’t revealed when each league’s squad is due to release. It is pretty easy to work out from prior years and what has happened so far in FIFA 19 though. Here’s everything you need to know about the Team of the Season (TOTS) release schedule for FIFA 19.

Team of the Season (TOTS) Release Schedule for FIFA 19

While the official schedule is yet to be revealed, it seems clear that EA Sports is sticking to the same major league release schedule as previous years. First came the Most Consistent/Community Voted squad and the Premier League followed, which is exactly how TOTS has started in the last few years.

Therefore we can be pretty confident when guessing when the other leagues are due to arrive. The full schedule is likely to be:

Of course, EA could pull a fast one again and change up the schedule. We will be sure to update you here if that happens.

As for the minor leagues, it is a little more tricky to predict. We have already seen the release of the Saudi League and EFL squads in FIFA 19, but there are more to come.

Rather than releasing a top 50, like last year, EA Sports has opted to return to full minor league squads. Below is how we think the minor league TOTS schedule will play out and what we’ve already seen. We’ll be sure to confirm once we know the days for sure.

That’s everything you need to know about the Team of the Season (TOTS) release schedule for FIFA 19. For more tips and tricks on the game, be sure to search for Twinfinite.