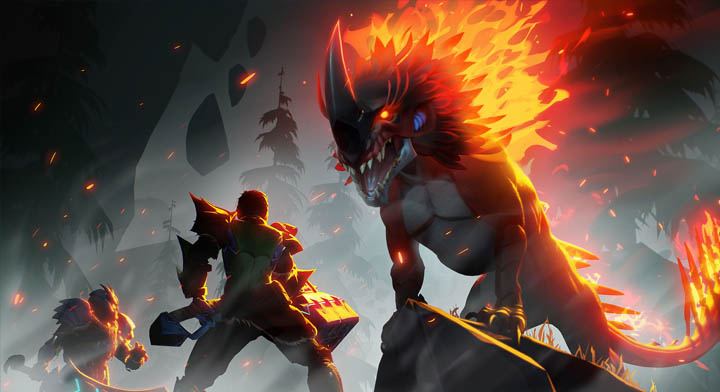 Developed by Phoenix Labs, Dauntless is a brand new free-to-play online monster hunting game released for PC and consoles. If you’re just getting started and are wondering which are the best weapons to use in Dauntless, we’ve got you covered. Here’s everything you need to know.

Best Weapons to Use in Dauntless

Just like in Capcom’s Monster Hunter series, there are a few different weapon types to choose from. While we do feel that some weapon types are better than others, ultimately it’s more important for you to choose the type that best suits your play style.

Nevertheless, if you’re undecided and would like some input on which ones you should try out first, here’s our ranking for the best weapons to use in Dauntless from best to worst.

If you’re familiar with the Switch Axe in the Monster Hunter series, you’ll likely already know what you’re getting into with the Axe in Dauntless.

The reason why we’ve picked it out as the best weapon type in the game is its ability to interrupt attacks, and its surprising utility with the Axe throw as well.

There’s definitely a steep learning curve that comes with learning how to use the Axe, but once you’ve familiarized yourself with its timings, you’ll find that it’s remarkably easy to interrupt Behemoth attacks and stun them for seconds at a time.

The nice thing about the Axe is that it’s also great for cutting off tails in Dauntless, and it also provides you with a bit of crowd control and ranged utility by allowing you to throw it forward.

The War Pike isn’t going to deal a ton of damage, as compared to the rest of the weapon types in Dauntless. However, it’s extremely useful, and you can bet that everyone else in your hunting party will be glad to have a War Pike user on their team.

This weapon type specializes in wounding Behemoths with its piercing damage. By striking a Behemoth’s limbs repeatedly, you can deal tons of wound damage, create new wounds, which in turn increases the amount of damage that slashing and blunt weapons can do. Your own damage multiplier won’t benefit all that much from wounds, but the overall DPS output of your team will increase dramatically thanks to your efforts.

If you fancy a more mobile and fleet-footed play style in Dauntless, then the Chain Blades are the best weapon type for you.

With the Chain Blades equipped, you can move very quickly in Dauntless, allowing you to zip around Behemoths to get quick attacks on them, or close distances when you’re too far away. You’ll want to keep close with this weapon type, but be careful not to let your stamina deplete from spamming that attack button too much.

Similar to the Axe, the Hammer is also a very slow weapon that can deal tons of damage once you get used to its timings.

The big difference between the two, though, is that the Hammer can’t sever tails like the Axe can, making it a little less useful. It’s still great for interrupting attacks and can deal tons of stagger damage to Behemoths.

While the Hammer can be useful in group play because of its stagger potential, we’re more inclined to favor the Axe for its added utility.

The Sword is probably the best weapon type to start with if you’re still getting used to the combat in Dauntless. It’s also the easiest weapon to pick up and play with, but we don’t really recommend sticking with it for too long once you’ve familiarized yourself with the game’s mechanics.

The Sword does slashing damage, and is an all-around very average weapon in terms of stats and combos. It’s decently quick (though not as quick as the Chain Blades), and has nice combo potential. It’s a very safe bet as a weapon choice, but it doesn’t particularly excel in any area either.

The Ostian Repeaters are probably the coolest weapon type in Dauntless, but in our experience, we found that they just didn’t bring much of value to the table.

As a ranged weapon type, the Repeaters are a great offensive option when fighting from a distance or when facing flying Behemoths. The catch is, you deal more damage the closer you are to the Behemoth, so if you keep staying away, you’re gonna be useless.

In the early game, the Repeaters aren’t really ideal for most hunts. However, if you stick with it, unlock more weapon mods and get to the late-game portion, you’ll have more options to properly create a good Repeaters build with decent damage variety.

That’s all you need to know about the best weapons to use in Dauntless. Be sure to check our Dauntless guide wiki for more tips and information on the game.