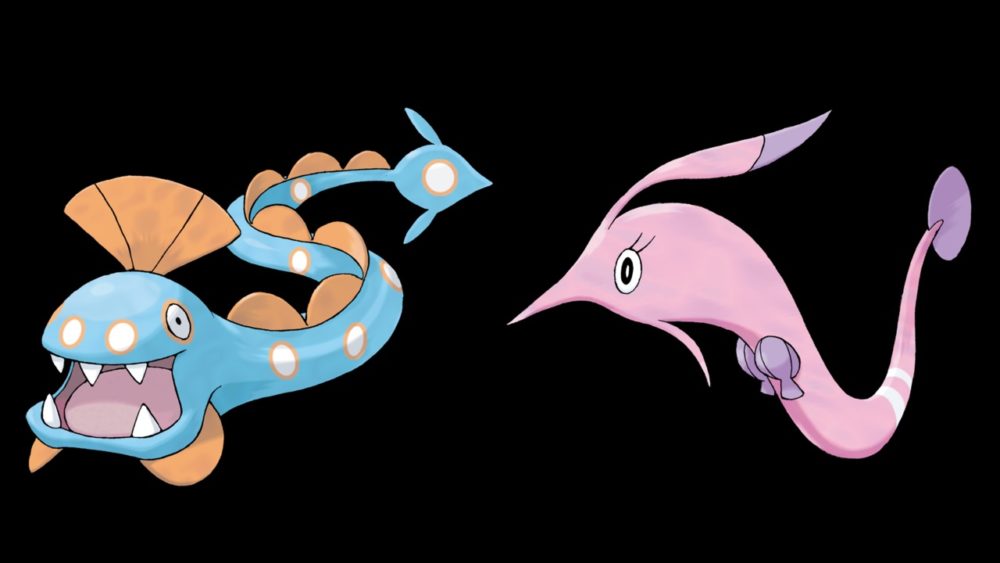 The cute and cuddly Bivalve Pokemon, Clamperl,finally made its debut inPokemon Go during an event backin February. Up until then there was speculation as to how it would evolve. Here’s how to evolve Clamperl into Gorebyss and/or Huntail.

You can obtain Huntail or Gorebyss in the main line games by trading Clamperl while it holds a specific item. Pokemon Go went a different, simpler (sort of) route.

Like Poliwhirl and Gloom, this little clam can evolve into two different Pokemon: Huntail or Gorebyss. Both evolutions resemble different types of eels with the former’s sharp teeth looking more vicious than the latter’s hummingbird-like mouth. However, looks can be deceiving.

To get Gorebyss and Huntail, first you need to find the un-evolved form, Clamperl. This is a Water-type creature, so it’s more commonly found near bodies of water. But, it can also be seen anywhere just like all Pokemon that aren’t region exclusive.

The event that happened two months ago also introduced the shiny version of Clamperl. So, make sure you tap on each one you see even if you already have all three Pokemon in this evolution chain.

How to Evolve Clamperl into Huntail or Gorebyss

Now this is where it gets tricky. All you need to evolve Clamperl into Huntail or Gorebyss is 50 candies. That means if you want both evolutions you’ll need a total of 100 candies.

That’s all pretty straightforward, but the tricky part is how the evolution is decided. And that is, unfortunately, 100 percent random.

Since there are only two evolutions the laws of probability tell us that for every Huntail you get there will be an equal amount of Gorebyss.

Of course, that’s not always the case in practice. Make sure you hold on to as many Clamperl as you can just to be safe. Set it as your partner if you need to farm candies. Don’t give Pokemon Go’s RNG the chance to stop you from filling out your Pokedex.

Huntail doesn’t have much to offer statistically or in its moveset. First, we’ll look at the Deep Sea Pokemon’s stats:

Its moveset isn’t bad, but there’s not much worth noting. Here are Huntail’s fast attacks with type and strength:

And here are the charged moves:

Well that was fairly unimpressive. The more benign-looking Gorebyss is slightly better, but not by much. Here are its stats:

Gorebyss has slightly less powerful water moves, but makes up for it with a higher attack stat. Here are its fast attacks:

Neither Huntail nor Gorebyssexceed at anything. They’re essentially just Pokedex filler for trainers who want to catch ‘em all. Like Clamperl, both evolutions are pure water types, but their movesets make them fit better into different categories.

Huntail looks like a vicious moray eel but hits about as hard a purring kitten. It’s a low-tier water attacker. With an optimal moveset of Bite/Crunch, it fits better into the Dark attacker category. However, it still winds up being a low-tier option.

Gorebyss is the standout of the two evolutions, which isn’t saying much. It’s just an average Water Pokemon and is better set up as a Psychic attacker with Confusion/Psychic. It also falls somewhere in the middle when it comes to Psychic attackers.

That’s all there is to know about Clamperl’s evolutions. Even though these Pokemon won’t help you take down Giratina, you can at least give them a little boost by trading with a lucky friend. If you ever need more pointers on the game, make sure to check out our Pokemon GO Wiki.