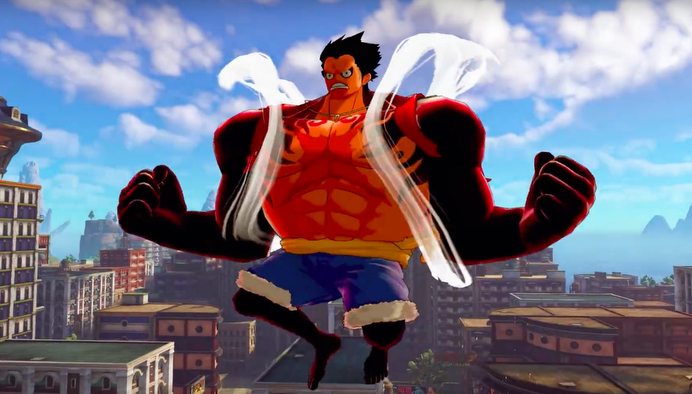 How to Go Gear Fourth in One Piece World Seeker

There are plenty of things One Piece: World Seeker fans will want to figure out how to do, but key among them will most likely be how to go Gear Fourth.

It’s a fair assumption, especially since the game is the first installment to offer the transformation as a key part of its gameplay. There’s also the fact that it has been heavily advertised as an included feature, with several trailers and screenshots showing it off.

However, it isn’t an ability you get right off the bat. Instead, you’ll need to unlock Go Gear Fourth by progressing to a certain point in the story; more specifically, to the boss fight with Fujitora in Chapter 8 (light spoilers ahead).

After progressing through most of the mission, players will be informed of a Navy Admiral approaching the town. Eager to confront them, Luffy will meet them, discovering that it’s Fujitora.

After a brief cutscene, Gear Fourth will be unlocked. It can then be activated by pressing up on the D-Pad, with its duration dependent on how many tension gauges you have filled up.

One gauge will last about 20 seconds, two gauges buys you 40 seconds and three gauges grants you a full minute.

To fill them up, attack Fujitora with some combos without sustaining damage from him. This should fill your gauge and allow you to extend your time in Gear Fourth.

It’s also important to note that after using and depleting Gear Fourth, you’ll be fatigued and unable to refill your tension gauge for a short while.

What Gear Fourth Does in One Piece World Seeker

Once activated though, Gear Fourth can be a useful trump card to have up your sleeve.

Offering the strength of Armament Haki and the speed of Observation Haki simultaneously, the form allows you to deal heavy damage to enemies in a short period of time.

It also grants the player with invincibility until the form is depleted, making it ideal for getting out of tight situations.

However, the form can only be used in more open areas. Cramped confines like a ship deck or alleyway will leave you unable to transform, so stay aware of whether there’s enough room to carry out the transformation.

Hopefully this cleared up how to go Gear Fourth. For more on One Piece: World Seeker, check out our full review of the open world title and our wiki guide.