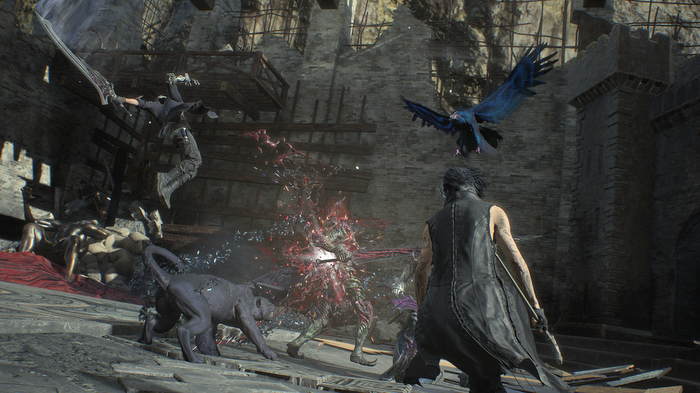 How to Revive Griffon and Shadow in Devil May Cry 5

Demons though they may be, V’s animal companions in Devil May Cry 5 aren’t invincible. As such, you’ll want to know how to revive Griffon and Shadow should they take one too many hits.

Though it takes a fair bit of damage to take down V’s demonic pals Griffon and Shadow, the situation can arise when they’re taken out of the fight by one too many hits.

This is especially common in boss fights, where you’re more likely to send them charging into danger to deal damage to bosses with wide-ranged attacks.

Fortunately, both can’t be killed by attacks. Instead, they’re sent into a codlin state known as Stalemate, after which they’ll be fully recharged and ready for another round.

Players need only wait until either animals’ cooldown period is complete for this to occur, after which they’ll be able to control them in battle once again.

On the top-left of the screen you’ll see HP meters for Griffon and Shadow, shaped in the form of the animals. How full the gauge is represents the demon’s health and once it’s depleted the gauge will recharge and build back up. You can fully revive V’s familiar when the gauge is full again.

How to Revive Griffon and Shadow Quickly

With that said though, there is a way to speed up the rate at which both regenerate.

If players position V next to either animal while they’re regenerating health, the rate at which they regenerate will increase.

However, this requires players to remain in a fixed area to properly work. As such, their regeneration rate will return to normal if V leaves the specified area to attack an enemy or dodge their attacks.

To that end, whether you should or shouldn’t speed up your allies’ regeneration rate depends on the situation. If there are relatively few enemies or there’s a nice bit of space between you and them, try to speed up your companions’ recovery.

If there are a large number of enemies or a boss bearing down on you relentlessly, take your time and they’ll be back in the fray when they’re ready.

Hopefully, this helped you figure out how to revive Griffon and Shadow in Devil May Cry 5. For more on the game make sure to search Twinfinite, and check out our Devil May Cry 5 guide wiki for tips, tricks and helpful info.