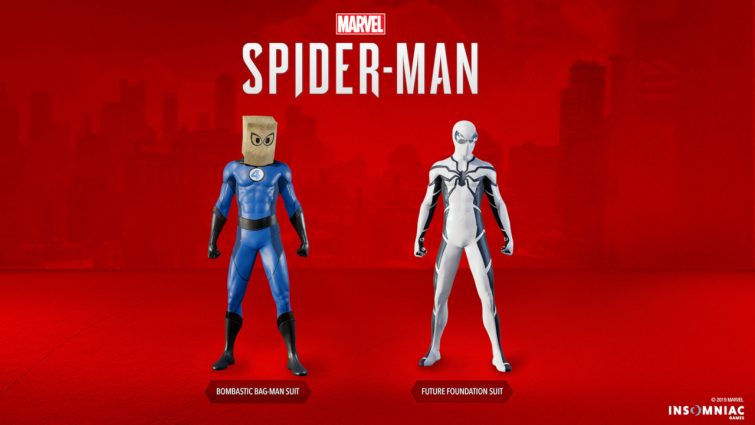 The PlayStation 4 exclusive, Marvel’s Spider-Man, is as much a standalone, spectacular experience as it is a celebration of the friendly neighborhood wall-crawler’s history, and the team at Insomniac Games isn’t done celebrating just yet. Starting today, gamers who install patch 1.14 for Spider-Man will find two new additions to their spider suit wardrobe that reference two of Spidey’s more fantastic adventures. Pun intended, because both suits reference the times he teamed up with the Fantastic Four.

The first costume, the Bombastic Bag-Man, is a callback to The Amazing Spiderman #258 when Spidey visited Reed Richards (aka. Mr. Fantastic) to examine the black symbiote suit that later become Venom. He managed to pry off the suit, which left Spider-Man without any clothes.

Enter the Human Torch, who loaned Spider-Man an old, ill-fitting Fantastic Four suit. Of course, the suit didn’t have a mask to hide Spider-Man’s identity, so the Human Torch, the eternal prankster that he is, handed Spidey a grocery bag. It wasn’t much, but it would do, thus giving birth to the Bombastic Bag-Man. Unfortunately, since all the promotional images feature the front of the suit, we don’t know (yet) if the costume includes the infamous “Kick Me” sign on the back.

The second costume, the Future Foundation Suit, looks more like something Spider-Man would wear/design. Thanks to the big, black spider on the front and the white and black color scheme, the suit has some vaguely Anti-Venom/Spider-Gwen stylings, but that’s hardly a complaint.

The Future Foundation is certainly an interesting chapter in Spider-Man’s life, as it was when the Fantastic Four opened their doors to more members —as well as ditched the iconic blue and black suits for white and black ones— and transformed the team into a philanthropic group in Fantastic Four #579. Apparently, Doctor Doom got involved, as well as an inter-dimensional “Council of Reeds” (a collection of Reed Richards from alternate universe), and the whole thing was just nuts, even for Spider-Man.

Getting back to the matter at hand, the Bombastic Bag-Man and Future Foundation suits are freely available for anyone who downloads the patch, no in-game unlocks necessary. Just as with the “Kick Me” sign, though, we don’t know if these suits come with special abilities. You’ll just have to give them a spin to find out.

For the latest on Marvel’s Spider-Man news, stick like a wall-crawler to Twinfinite.