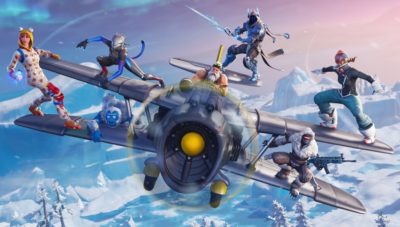 It’s a new week and a new set of challenges have arrived in Fortnite Battle Royale. Following previous time trial challenges, the new set asks you to take to the skies above the map. Here are all the X4-Stormwing Time Trials Locations in Fortnite.

Rather than running around on the ground, these Time Trials ask you to jump into the planes that were added this season.

Across the map, you’ll find a few different places to test your flying skills, with the place you need to fly made obvious by some bright blue rings.

There are three places you need to go to begin the X4-Stormwing Time Trials, and they are:

Simply find an X4-Stormwing plane, the locations for which you can see here, and fly to the locations above, going through the rings and completing the time trials. Do all three of them and the challenge for this week will be completed.

That’s everything you need to know about all the X4-Stormwing Time Trials Locations in Fortnite. For more tips and tricks on the game, be sure to check out our Fortnite Season 7 Wiki guide. We also have guides on the rest of the Week 9 challenges, including specific guides for the golden balloons locations, and where to dance on top of a sundial, giant metal dog head, and oversized cup of coffee.