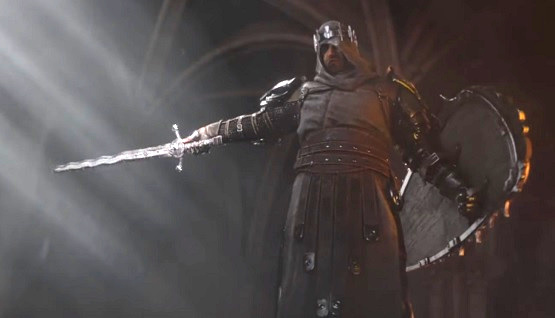 Recently, Ubisoft teased For Honor’s newest hero the Vortiger. Now, we get to see exactly what our new hero is all about in the first official gameplay trailer that reveals the just how deadly Vortiger and his knights really are.

Vortiger is the leader of the newest class in the game, the Black Priors. This new class of knights touted as fighting for justice, but doing so while renouncing the code of chivalry. Billing them as possibly one of the most deadly classes, fighting with techniques that would be frowned upon by the rest of their faction.

You can see them in action in the video below:

The Black priors use a sword, but the key to their offense, is their defensive kite shield. With the massive kite shield at the ready, you will be able to defend against multiple enemies. While also using your shield to charge at foes and break their guard.

This is thanks to their stance that confidently can absorb impact, and counter any type of melee attack. Which gives them a massive defensive strategy against all other classes. The Black Prior will be a key role in capturing points on the map. Their high survivability gives them the advantage when holding capture points, even if they are outnumbered by foes.

The new class is also equipped with some game-changing abilities. Sinister Shield allows players to sacrifice some of their own HP to help allies regain some of their own. And Umbral Shelter will grant all teammates within close range a defensive shield.

This will provide several very useful strategies in any match and the Black Priors are likely to see a lot of use in For Honor competitive play. Players will be able to get their hands on the new class Jan 31.

For Honor is available to play now on PS4, Xbox One, and PC.