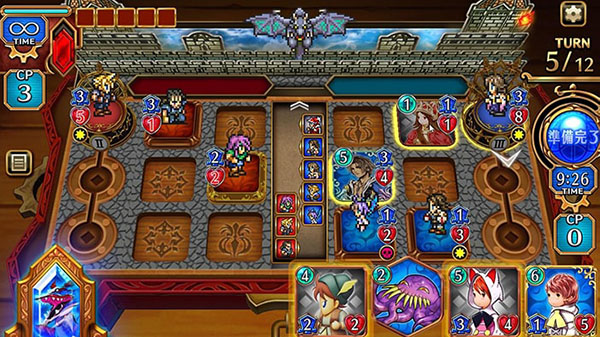 Publisher Square Enix has revealed that Final Fantasy Digital Card Game will release sometime in 2019, Gematsu reports. As the name would suggest, the title is a digital CCG which will also be free-to-play. It is set to launch on PC and smartphones through the Yahoo! Japan Game Plus platform.

The game is currently only scheduled to release in Japan, and Square Enix hasn’t mentioned anything regarding bringing Final Fantasy Digital Card Game to other territories at this time.

A closed beta test will take place between Jan. 18 and Jan. 25. It’s worth noting that the test will be limited to 10000 players and sign-ups are currently live.

The title revolves around turn-based battles which involve building up a hand of your own while foreseeing your opponent’s actions in the limited time given. Playing cards summons characters on the board as pixelated sprites, which should infuse battles with a fair amount of life, while also tugging at our nostalgia strings.

Players will encounter both classic Final Fantasy characters as well as faces from more recent titles.

If you happen to speak Japanese, you can head on over to the game’s official website for more details. Here’s hoping that, eventually, Final Fantasy Digital Card Game will also make its way to territories outside of Japan.