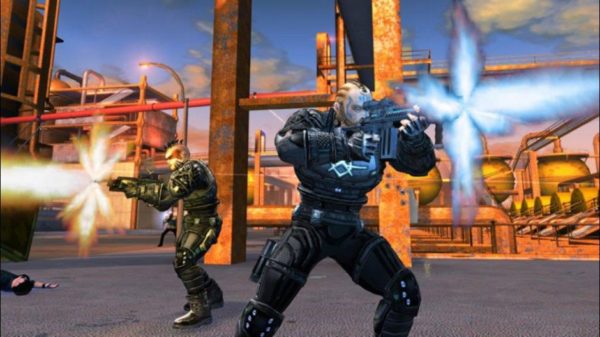 If you want a good game that is guaranteed to tide you over for a while, you might want to visit the Xbox store. One of the best Xbox 360 games ever made (that is also backwards compatible on the Xbox One) is currently available for the low price of free: Crackdown.

If you never heard of Crackdown —which is a feat in and of itself— here’s all you need to know about the game: it’s an open world sandbox where you play the role of a genetically engineered super cop. You’re charged with patrolling Pacific City, tracking down the various gangs and their leaders, and executing them with extreme prejudice and explosions. That’s it. Now go crazy.

The legacy of Crackdown has lasted much longer than anyone could have anticipated, thanks to its simple premise (which leads into one of the greatest plot twists of gaming history), hectic gameplay, sandbox world, and tangible progression system. This is no more apparent than the hype surrounding the upcoming Crackdown 3, as well as the genius marketing ploy of making the living meme Terry Crews the face of the game.

Now, Crackdown has been given away for free in the past but only as part of the Games with Gold promotion. I even bought a subscription just so I could get my hands on the game (and Fable 3), but today marks the first time Crackdown was given away to everyone regardless of their Xbox Live Gold subscription. And the game isn’t just free on the Xbox One. If you somehow managed to hold on to your Xbox 360, you can also snag it for free.

You’re probably wondering why Crackdown is currently free for all, and so are we. Our best guess is it’s meant to hype X018, which is supposed to start tomorrow. Many gamers expect a Crackdown 3 announcement during the convention, and what better way to get people talking about the game than a free copy of the original Crackdown? Free game equals free publicity. Of course, that’s just an educated guess.

We have no idea if Crackdown is now free forever or for a limited time, so you should probably grab your copy while you can.