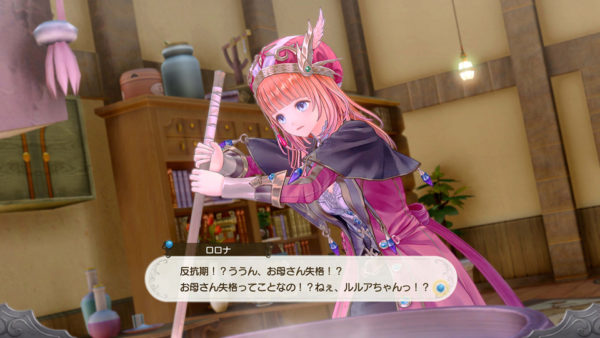 Today Koei Tecmo released a brand new batch of screenshots and artwork of its upcoming JRPG Atelier Lulua: The Scion of Arland.

Following the reveal on Famitsu, we get to see Rorolina Frixell (who most know as Rorona) in her grown-up form. In this game, she is the mother of the protagonist, Elmerulia “Lulua” Frixell.

Her skills are at the top among the alchemists of Arland, but since her understanding of alchemy is rooted in her own theories, she’s not good at teaching others. She occasionally moves following her work, and her passion for pie has not faded since her younger years. Even during the events of Atelier Lulua she struggles every day to create even more delicious and unusual pies.

Fix Finis is a mysterious magician with a solemn aura. No one can see through his magic tricks, not even the masters. He is always very kind to children and he seems to be interested in Lulua’s growth.

Nicodemus David Dieter, also known as “Nico” used to be a reputable sailor, but now he lives the life of the adventurer. He has a rough personality and his speech is equally rough. He doesn’t seem to think too deeply about what he says.

Lionela Einze runs the bar “Araphoro” in Arland. She used to be shy, but while traveling with Rorona prior to the events of Atelier Lulua she became sociable and even popular. She opened her bar to create a place where people can relax no matter the circumstances.

Chim Dragon is a homunculus who grew bigger by using a certain secret potion. Currently, he travels with Piana, Lulua’s mentor. He calls Lulua herself “nanomaster.”He takes care of the chores and helps the protagonist travel by driving his carriage.

We also get to see the Alchemy Riddle feature which appears in Atelier Lulua: The Scion of Arland. It’s a book written with letters that only Lulua can read, and it can help her become an accomplished alchemist. Deciphering the Riddle can yield new recipes, reveal new gathering sites, and even progress the story.

Lulua can’t read it fully just yet as many mysterious keywords are missing. They can be retrieved through battle, gathering, and crafting. Hints to how to find each keyword are included in the Riddle itself. Each time a page is deciphered, it will unlock a reward that will further Lulua’s growth.

Last, but not least, at the end of the gallery below we also see a costume for the protagonist that will be distributed as first-print bonus.

Atelier Lulua: The Scion of Arland will be released in 2019 for PS4 and Nintendo Switch.