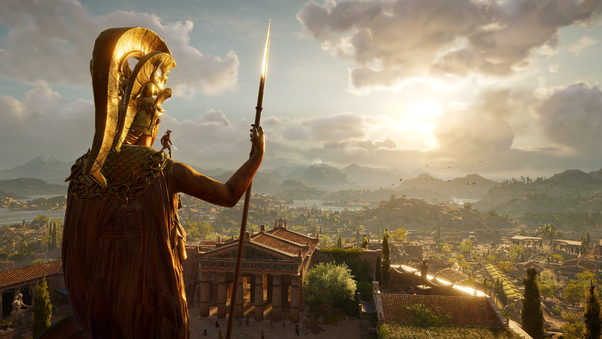 Assassin’s Creed Odyssey takes players to the most ancient setting yet seen in the series. The 5th century BC marks a tumultuous time for Ancient Greece, as the Peloponnesian war rages between Athens and Sparta. But it’s not all blood and guts; Greece is absolutely one of the most beautiful open worlds we’ve ever explored. Crystal clear waters lap around barren islands, which lay off a mainland punctuated by steep cliffs and snow-topped mountains. It’s truly stunning, and it’s also astonishingly large in scale. In fact, we’ve measured the map, and it’s the largest in the series’ history. Little wonder, then, that it will take players some time to cross.

The map of Assassin’s Creed Odyssey measures 15.5km east to west, allowing for a 500-meter buffer zone that players can’t traverse on the eastern edge. You can watch how long it takes to cross at ‘Travel Speed’ on the Adristia. No, we didn’t swim, because that would have taken a comically long amount of time. We’d probably also have been eaten several times along the way by hungry sharks.

As you can see, it takes 10 minutes to cross the map at full tilt on the ship. And if you’re thinking that sounds fast, you’re onto something. Odyssey is huge, no doubt –it’s one of the biggest open world maps this console generation, in fact– but the speed of the Adrista isn’t to scale. Using the old speed = distance/time equation, 10 minutes to travel 15.5km means the Adrista is traveling at around 50mph. I’d wager a Greek warship of the 5th Century is probably good for about 10mph in reality.

Regardless, Assassin’s Creed Odyssey’s map is hugely impressive and it’s packed with enough content to keep you amused for nearly 100 hours of gameplay. We were super impressed with the game in our recent review, where it earned top marks.