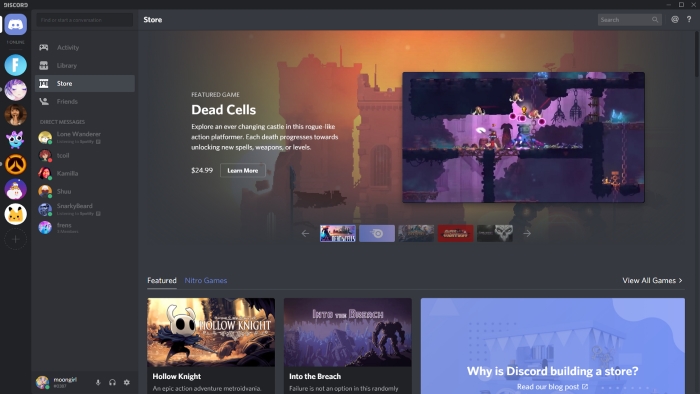 The store offers a curated selection of games for Discord users to buy and launch straight from the Windows desktop app to play. It currently has 19 titles available with Dead Cells, Hollow Knight, Into the Breach, Celeste, Starbound, and more.

Discord’s store will also be releasing PC titles exclusively to the platform first before other digital storefronts. The ‘First on Discord’ program will have some games exclusively for the first 90 days after launch, though those games are allowed to launch for consoles during that time.

The app is upgrading its Discord Nitro service with a library of games that subscribers can access and play, similar to Microsoft’s Xbox Game Pass. Users can download and play 60 titles currently for $9.99 per month or $99.99 for a year. The original Nitro service has been renamed Nitro Classic, and offers more chat customization options and a larger file upload limit for $4.99 per month.

The last feature to launch in global beta today is called the “Universal Library,” which allows Discord to launch games from other game launchers from the app. It will scan users’ computers for all available games and launch a specific launcher, such as Steam or Blizzard Battle.Net, to start a game right from the app.