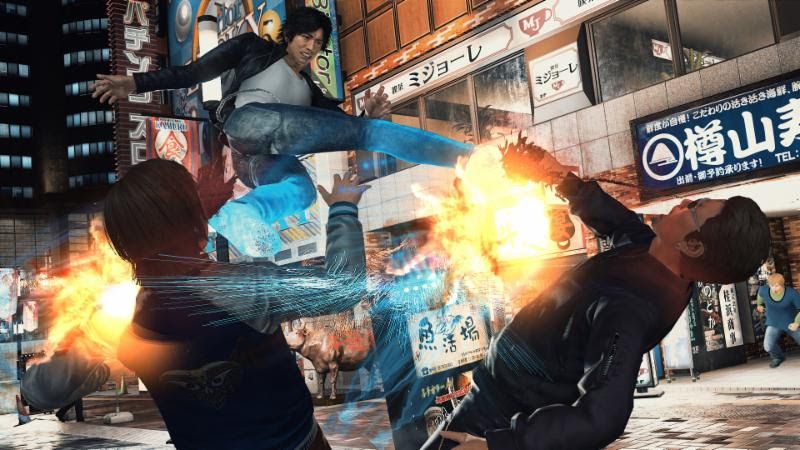 During Sony’s PlayStation LineUp Tour pre-TGS show, Toshihiro Nagoshi the head of Ryu Ga Gotoku Studio (Yakuza), took to the stage to announce a brand new IP from the studio, Judge Eyes. The title is a courtroom drama that combines elements of both detective and action games. Two different trailers were released today, the first a cinematic trailer focusing on characters and story, and the second a gameplay trailer showing off different aspects of the game. You can take a look at both trailers down below, with the cinematic trailer first followed by the gameplay one.

Judge Eyes tells the story of Takayuki Yagami, a former lawyer who lost his will to defend clients after a certain case and has since opened up a detective agency in Kamurocho. Yes, that’s the same Kamurocho featured in the Yakuza games. Yagami actually grew up in Kamurocho and he’s played by Takuya Kimura, a very popular actor in Japan. One day while collecting clues for a serial murder case, Yamagi is drawn into a complex mystery.

Judge Eyes’ gameplay weaves in various mechanics to fit with the detective theme. Yagami will have to tail suspects, eavesdrop, use disguises, pick locks, take pictures, investigate crime scenes, build evidence, and more. These mechanics are juxtapositioned against the game’s action-based combat, which somewhat resembles the studio’s Yakuza series. Yagami is incredibly quick in combat, pulling off a number of ridiculous combos in the trailer. It seems like Judge Eyes’ combat has more of an emphasis on speed.

In addition to the main investigation, there will apparently be a number of side cases to investigate. Fans of Yakuza should also be pleased to know that Judge Eyes features a number of different minigames to engage in. The gameplay trailer shows off a few like gambling, pinball, and drone races.

Judge Eyes launches on Dec. 13 in Japan, exclusively for the PS4. Sega has already confirmed the game will be coming west, but outside of a 2019 release window there’s no given date yet.

What do you think of Ryu Ga Gotoku Studio’s new IP? Are you excited to see them try something new, or are you just waiting for more Yakuza? Let us know down in the comments below.