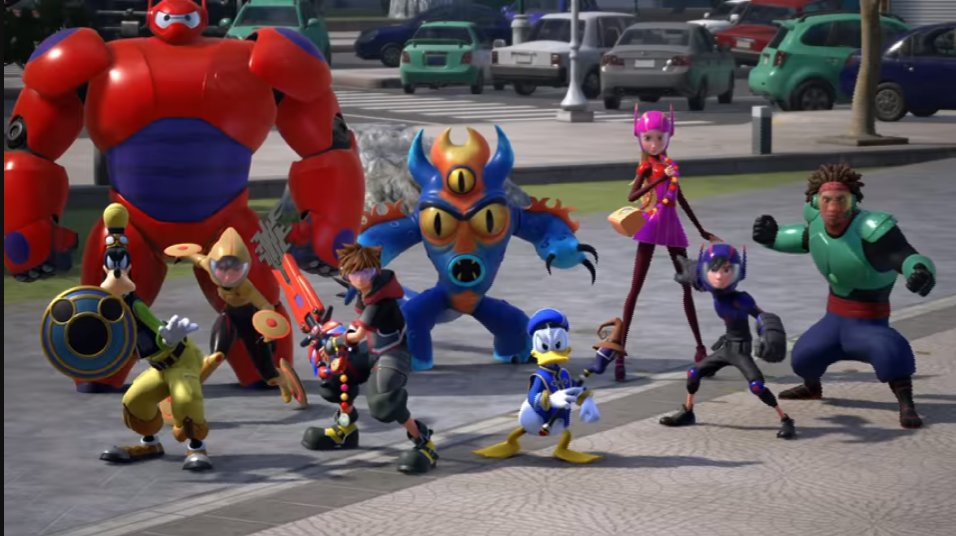 After showing a new Kingdom Hearts III trailer during Sony’s Pre-TGS conference, director Tetsuya Nomura promised that an extended version of that trailer would be coming, and now it’s here. The lengthy trailer clocks in at nearly three and a half minutes, providing a more detailed look at the Big Hero 6 and Pirates of the Caribbean worlds, while also providing some tantalizing story hints.

The trailer starts out with a gameplay vignette showing Sora riding around on Baymax in rail shooter style, jumping through rings in the air, steering the Black Pear in some intense naval battles, and using even more of the flashy Keyblade Transformation we’ve already seen. Then about halfway through the trailer pivots to a look at the story, and surprisingly seems to put a big emphasis on Roxas.

While sharing ice cream in the Big Hero 6 world, Sora has a flashback to Roxas sharing ice cream with Hayner, Pence, and Olette. At one point, the Twilight Town trio even ask Sora and crew to let them help find Roxas, in the other Twilight Town. Plenty of familiar faces pop up like the organization members Vexen, Demyx, and Zexion’s human counterpart Ienzo. We also get a glimpse at some new Disney faces like Davey Jones. There’s plenty of tantalizing little details for fans to pick apart, including a scene that seems like Sora, Donald, and Goofy are confronting Xehanort at the Keyblade Graveyard. You can take a look at the full trailer down below.

Kingdom Hearts III is scheduled to release on January 29 for PS4 and Xbox One. You can also check out our hands-on impressions of the game from E3, where we found the game to be both comfortingly familiar and fresh.

Join us as we embark on an adventure together with Sora, Donald, Goofy & the formidable Big Hero 6 crew in January! #KH3sharethemagichttps://t.co/Pir6UnQwo7 pic.twitter.com/TSMkzZ5EdJ