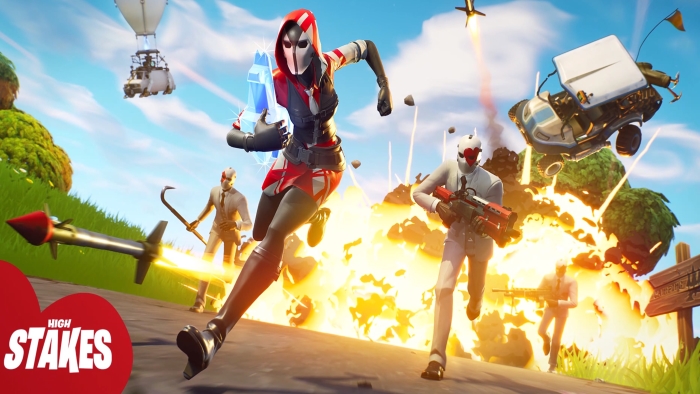 Fortnite: Battle Royale’s latest event is called High Stakes and will offer a heist-like limited-time mode, similarly themed outfit, and challenges with rewards. The new event was revealed during the last week of the Summer Skirmish competition this weekend, currently being held at PAX West 2018 convention in Seattle, WA.

The event will come with a new limited-time mode called Getaway, where squads must search for one of four safes each containing a large llama jewel, pick it up, and safely extract it. The safes will be placed as supply drops at random locations in the map, and teams can take the jewel from other teams. The first four teams to reach one of the four floating, white getaway vans with a jewel will win.

A grappling hook gun was also introduced and will be coming alongside the High Stakes event for the entire Battle Royale game. The Grappler is an epic rarity gun that contains a magazine of 15 charges and pulls players towards any structure it attaches to. Check out the new mode and gun from the official Twitch stream of the Fortnite Summer Skirmish qualifiers.

The Wild Card outfit will be in the item shop sometime during the event, featuring a white suit and four heist masks each fashioned with a suit of cards. There will also be specific free challenges to complete with rewards, such as a spray and crowbar pickaxe, when the High Stakes event drops sometime this week.