Compulsion Games has taken to their website to detail some of the post launch content for their psychedelic survival game, We Happy Few. Officially launching on August 10, We Happy Few will continue to be supported with a free update and a season pass that will include additional story content. Pricing of the season pass has yet to be officially announced.

The post launch update will include the Sandbox Mode, which Compulsion Games describes as a sort of “infinite mode”, allowing to you to modify the rules of the world.

“This free update will add an infinite mode, set in a world that you can customize as you wish (larger, smaller, more dangerous, less food, more Wellies, etc).  You will be able to customize some of the rules of the game, including choosing to play as a Wellie (Wellie Mode!). This mode will bring back the systemic, sandbox world showcased in the early days of We Happy Few.” 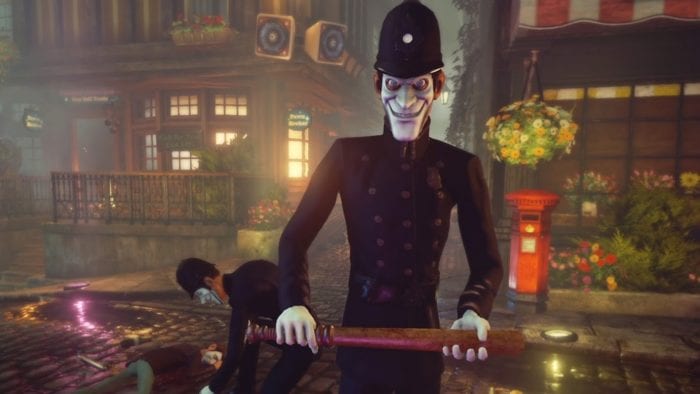 The 3 new side side stories to be included with the Season Pass are set within the town of Wellington Wells, and is is confirmed that this will be included in the Deluxe Edition of the game. Compulsion provided a title and brief synopsis for each story.

Roger & James in: They Came From Below!

Precocious Roger and Impetuous James set off in search of adventure and love, only to uncover bizarre technology and a terrifying new threat. All is not as it seems. Or is it exactly as it seems?

Heartthrob, artist, and personal trainwreck, Nick Lightbearer is Wellington Wells’ most celebrated rock star—but what truly makes him tick? Tune in to Uncle Jack’s late show to find out.

We All Fall Down

Much like any well-worn happy mask, all societies develop cracks in their veneer. But that doesn’t mean you should go digging up dirt from the past. Right? *pops a Joy pill* Right!

We Happy Few is set to launch on August 10 for PlayStation 4, Xbox One, and PC.