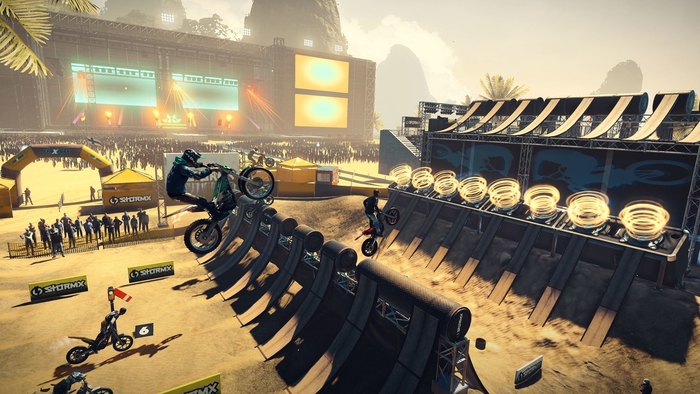 Trials Rising is the latest installment in Ubisoft’s wacky physics-based motorcycle platforming series, being developed by RedLynx. Originally announced during Ubisoft’s E3 press conference this year, the title is planning to be the biggest that the franchise has seen with more creation tools, more competition, and fresh visuals that give it a more modernized look.

Ubisoft has revealed the release date (via Eurogamer) and a new trailer for the game as well as some new details on the upcoming beta:

One of the exciting new features coming to Trials Rising is the new tandem bike mode, that allows two players to sit on and control the same motorbike, allowing for some zany and unexpected fun to be had. One player controls fifty percent of the power and balance, while the other player controls the other half. Trials Rising will also offer complete sharing and customization of bike skins and outfits for your rider, giving the community unlimited access to look like either complete idiots or super-cool bikers.

You can sign up for the Trials Rising Closed Beta right now, which will start on Sep 13 and run through until Sep 16. Trials Rising launches for the Nintendo Switch, PS4, Xbox One, and PC on Feb 12, 2019. Are you guys ready to fail repeatedly while also laughing uncontrollably? We know we are.