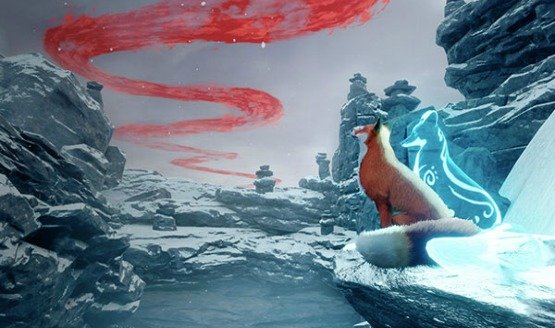 Infuse Studio and PlayStation have announced Spirit of the North, an adventure game that has you playing as a lone red fox journeying through artic tundras, wastelands, and forests. The game will apparently be “coming first to PS4,” with a release on other systems later on.

Based on the gorgeous debut trailer, Spirit of the North shares a similar style to games like Journey or Abzu. It also shares some similarities to Never Alone due to, of course, the main character as well as the inclusion of elements from Nordic folklore. During your journey, your fox’s fate will become intertwined with that of a female spirit fox, and it seems like this element plays heavily into both story and gameplay. Here’s an official description of the game via its website, and you can watch the first trailer down below.

“Spirit of the North is a single-player, third-person adventure game inspired by the breathtaking and mysterious landscapes of Iceland. The story takes root from various pieces of Nordic folklore. The game is unique in that it purposefully has no dialog or narrative. Players must breathe in their surroundings to solve various puzzles and speculate the meaning of a lost ancient civilization. Play as an ordinary red fox who’s story becomes entwined with the guardian of the Northern Lights, a female spirit fox. As you journey over the mountains and under red stained skies you’ll discover more about your companion and a land left in ruin.”

Spirit of the North currently doesn’t have a release date, but it will be coming first to PS4.