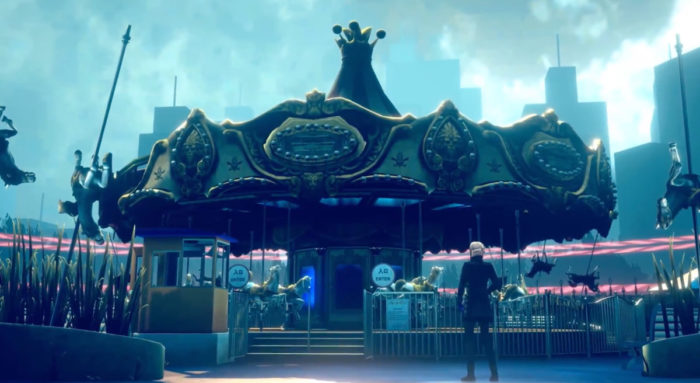 Spike Chunsoft and Kotaro Uchikoshi, director of the cult series Zero Escape, hosted a panel at Anime Expo 2018 on Thursday which revealed a new title in the works called AI: The Somnium Files. The game will feature character designs from Fire Emblem Fates designer Yusuke Kozaki. No release date was given for the visual novel, but it is set to release on PlayStation 4, Nintendo Switch, and PC via Steam.

The game follows Kaname Date, a detective with a cybernetic eye that is out to stop a string of mysterious murders in modern-day Tokyo. The cybernetic eye will be a key feature of the game that will allow you to delve into the memories of suspect you encounter in your investigation. Another character, Iris Sagan, was revealed for the game who is known for her Let’s Play videos on YouTube. It seems that we can expect AI to make some pretty meta commentary on internet and games culture.

Uchikoshi is mainly known for the Zero Escape titles, a series of psychological horror visual novels that also incorporate escape room puzzles. First making their way onto the PlayStation Vita and 3DS, the Zero Escape series has made its way to PlayStation 4 as a collection called Zero Escape: The Nonary Games. We reviewed the collection a while back giving it a 4 out 5, calling it “a really solid compilation that offers a great visual novel experience.”