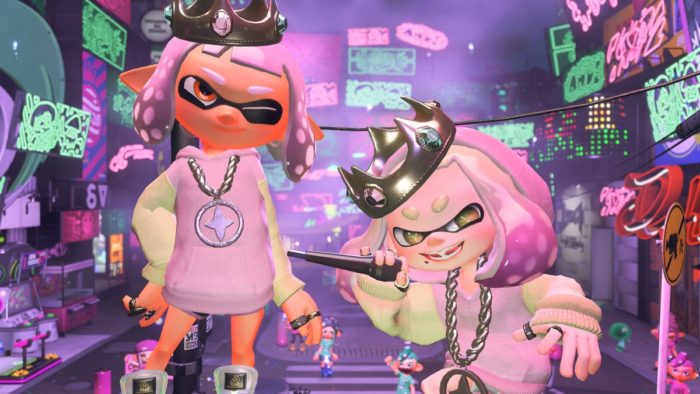 You want some of the freshest outfits for your Splatoon Inklings and Octolings? Pearl and Marina have got you covered, and thankfully not in ink. This time.

On July 13th, Nintendo will release the amiibo of Inkopolis’ newest and most most ink-credible DJs, Pearl and Marina. While we have known about these figures for quite a while, we never really knew just what they would unlock. Well, now we do. Thanks to a Twitter post by Nintendo of America, we now know the amiibo will grant players some truly tentacular threads.

While the amiibo themselves are physical recreations of Pearl and Marina’s original appearances, their unlockable outfits more closely resemble the characters’ clothes circa the Octo Expansion. Pearl’s amiibo will include a hoodie, gold crown, necklace and pendant, rings, and platform shoes (Pearl is pretty short, after all). Meanwhile, Marina’s amiibo will unlock headphones, a bandana, wrist watch, chain and pendant necklace, jeans, sneakers, and a belly shirt.

But that’s not all, folks, because these amiibo also have a little feature for all you shutterbugs out there. According to a post on the Japanese Splatoon Twitter page, players will be able to snap a picture of their custom character hanging out with either Pearl or Marina. Oh, and each figure will also unlock a new theme and sound effect for the Squid Beatz minigame found in the Inkopolis arcade.

The Pearl and Marina amiibo will be available as a two-pack for $24.99 wherever amiibo are sold. Assuming, of course, you can actually find some in stock. July 13th is a Friday, after all. Here’s hoping you don’t have triskaidekaphobia.