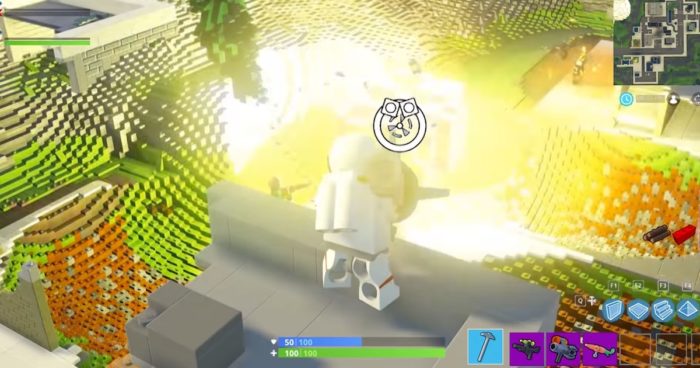 A fan-made Lego Fortnite Battle Royale recreated in the sandbox construction game Lego Worlds looks super charming, and we definitely wish it was more than just a well-edited video.

Bearly Regal has plenty of experience recreating scenes from favorite movies and TV series such as Star Wars and The Simpsons, and his Lego imagining of Fortnite Battle Royale looks like something we’d genuinely want to jump in and play. The trailer showcases everybody’s favorite Fortnite location: Tilted Towers. Jumping from a voxel party bus, the faux character lands amid the clock tower, skyscrapers, and streets that should look plenty familiar to anyone that’s played the game.

It doesn’t end at that, though, with a 10 or so minute gameplay demo following the snazzy trailer. It’s a bit wonky here and there, and the UI seems to have been added in post-editing, but it’s a pretty tremendous effort on the whole. Hats off to you, Bearly Regal.

Lego Fortnite is, of course, unlikely to become anything more than a fantasy, but how cool would it be to play a Lego version that leaned even more heavily into the building and construction that gives Fortnite its point of difference from other battle royale experiences?