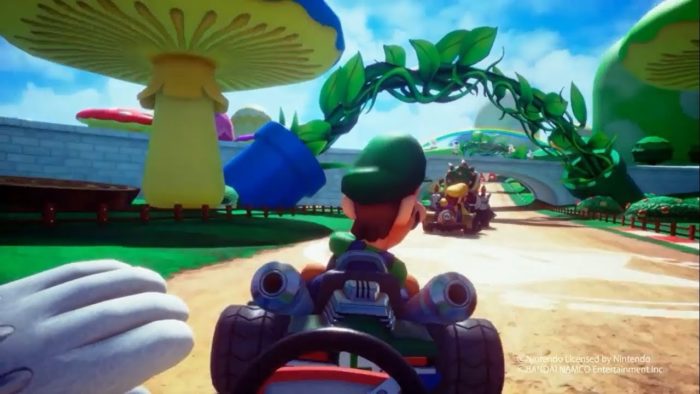 Starting this summer, Mario Kart fans in the UK will get to experience the game like never before. The Mario Kart Arcade GP VR experience is coming to the country, which lets you play the game in first-person view, just like you’re sitting in one of the karts yourself! Four players can jump into special “Mario Karts” and then zoom out from the starting line as they explore the Mushroom Kingdom as Mario, Luigi, Peach, or Yoshi.

The VR system is supported by the HTC Vive, and will feature “industry-leading graphics,” allowing players to reach out and grab items like banana peels and other power-ups to thwart the competition. The game, which first made its debut at VR ZONE arcade in Shinjuku, Tokyo, will be launching in August at VR ZONE Portal London, near the Hollywoodd Bowl at The O2. It will then come out to other VR ZONE Portal locations throughout Tunbridge Wells and Leeds. If you want to join in on the fun, you’ll have to make online reservations to do so.

This new setup will undoubtedly bring a ton of new fans into the fold, especially since VR already lends itself quite well to racing games like Mario Kart and that ilk.

If you’re interested in how the action is going to look in VR and the real world, check out the video above for a sneak peek!