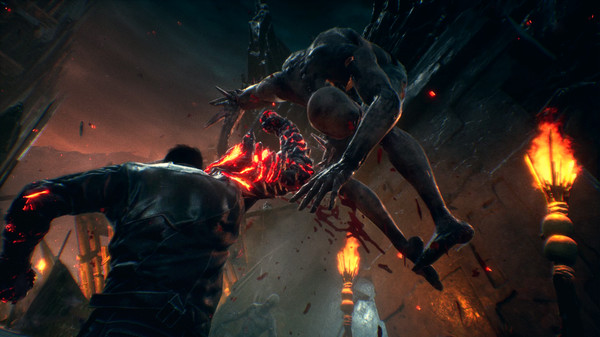 In 2019, 1C Company and Layopi Games invite you to decide the fate of Heaven and Hell with their new 3rd-person action game, Devil’s Hunt. Inspired by the novel Equilibrium by Paweł Leśniak, Devil’s Hunt follows Desmond, a man who has through a series of events, become Hell’s executor. Desmond’s actions will lead you towards siding with either Heaven or Hell in their war for dominance. 1C has provided a full synopsis of the game on their Steam page, and it looks like it will scratch the itch for fans of Devil May Cry and God of War.

“Once a bon vivant son of a rich entrepreneur, Desmond’s life has been steered into a sequence of unfortunate events that led him to lose most of his humanity. Gaining demonic powers and becoming the hell’s executor, he struggles to find a place for himself in the ongoing war. He is both the destroyer and the savior, as his human part is gradually stepping out of the shade of his hunger for vengeance. He fights fiercely with his fists and claws, making use of the skills both his demonic and human sides offer. Passing through the gates of hell and back, he will eventually have to decide where his place is.”

Not much is known about the minute to minute gameplay, but from 1C’s description and the screenshots provided, it looks like Devil’s Hunt will be squarely focused on over the shoulder melee combat like God of War or the long forgotten Dark Sector.