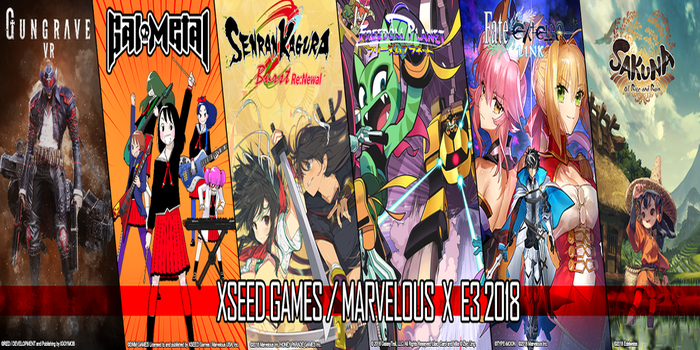 XSEED Games has made an announcement in preparation for E3 2018, presenting the lineup of games that the publisher will be showing off at the expo this year.

XSEED has announced six titles that will be playable at the company’s booth during E3 2018. These titles are Freedom Planet, Fate/Extella Link, Gungrave VR, Sakuna: Of Rice and Ruin, and Senran Kagura Burst Re:Newal. The post also mentioned that attendees at E3 will have the chance to meet Gal Metal producer Tak Fujii and Senran Kagura producer Kenichiro Takaki, who will both be present during the show, and that anybody interested should look to the XSEED Twitter and Facebook for further updates.

Providing further details on the games available at the show, XSEED’s post had this to say:

“With an emphasis on their console lineup, XSEED Games will offer experiences of all types including new VR and handheld titles, remastered editions of fan favorites, and indie gems. Action fans will get their first hands-on with the upcoming English installment in the Fate series, Fate/EXTELLA LINK, which builds upon the previous installment with more playable heroes and a new story. They can then try out the remake of the first entry in the SENRAN KAGURA franchise, SENRAN KAGURA Burst Re:Newal, rebuilt from the ground up for modern consoles in full 3D. This can also be followed by sampling the latest version of the indie darling Sakuna: Of Rice and Ruin. All of these titles will be playable on the show floor via the PlayStation®4 computer entertainment system. The publisher’s first VR title, Gungrave VR, will also be on display, showing off its gunslinging action on PlayStation®VR for PS4™ system. And finally, for fans who prefer to game on the go, the freeform rhythm title Gal Metal and the indie sensation Freedom Planet will be playable for the first time on Nintendo Switch.”

XSEED Games is the independent-focused publishing branch of Marvelous USA, Inc., and has been responsible in the past for the distribution of many beloved indie titles, such as the recent Shantae: Half-Genie Hero – Ultimate Edition, and all of the games in the Senran Kagura series. The company’s announcement of publishing Freedom Planet on the Switch in North America also confirms rumors that developer Galaxy Trail had planned to port the game, which was recently teased.