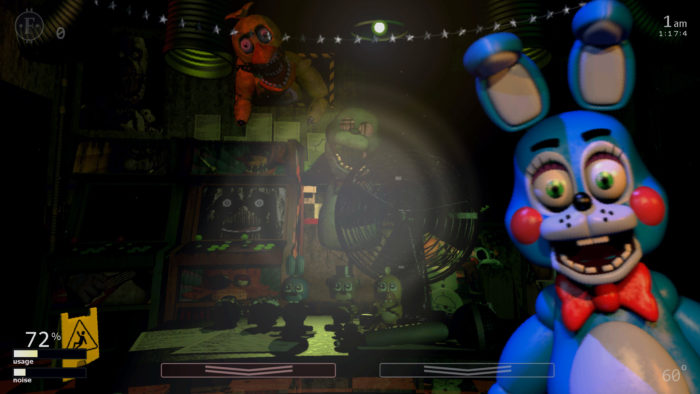 After four years, six sequels, five books, one movie announcement, and countless jump scares, you would think Scott Cawthon would be finished with Five Nights at Freddy’s. Well, obviously not, since he just released the latest in the FNaF franchise, and it is absolutely insane.

Welcome one and all to Ultimate Custom Night. The game, named after the infamous challenge mode designed for the most dedicated and masochistic of gamers (and Markiplier) is the culmination of everything gamers have grown to love and fear about FNaF. Ultimate Custom Night features fifty animatronics who roam the halls, vents, and air hoses of Freddy Fazbear’s Pizzeria and want nothing more than to take a bite out of your face. Yes, you read that correctly: fifty bloodthirsty animatronics. Not only will gamers encounter returning favorites like Golden Freddy, Circus Baby, and Balloon Boy, but they will also go up against several new faces.

Like previous custom nights, players can set each animatronic’s difficulty level from 0 to 20. If you thought 20/20/20/20 mode was hard, try setting all the animatronics in Ultimate Custom Night to 20. All fifty of them. Talk about a nightmare. But, Ultimate Custom Night isn’t all about avoiding animatronic-induced death by the skin of your teeth. No, players will also have to manage various bits and bobs around Freddy Fazbear’s, including a heater, power generator, a “global music box,” and air conditioning. And set up laser traps, collect Faz-Coins, and purchase knickknacks from the prize counter, because what is a haunted not-Chuck E. Cheese’s without prizes? Don’t worry, though, because vigilance will be rewarded with cutscenes, new locales, and a few hints into the ever-evolving story of the FNaF franchise.