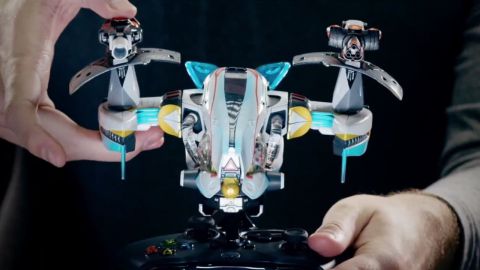 Toys-to-life game, Starlink: Battle for Atlas, was shown off during Ubisoft’s E3 2018 press conference. We were given a new look at the game, and how Star Fox will feature.

The game is still a toys-to-life game that sees you connect a figure to the top of your controller. The game’s description reads, “In Starlink: Battle for Atlas, you’re part of a group of heroic interstellar pilots, dedicated to saving the Atlas star system from the Forgotten Legion, an evil robot force. Starlink: Battle for Atlas offers a whole new gameplay experience: build your own modular Starship model, mount it on your controller, and take part in epic space combats. Equip your model with different parts and your Starship changes in game in real time. Assemble your fleet, mix and match your pilots, Starships and weapons to create your own play style and defeat the enemy.” You can check out the new trailer below, and see here for how the game works.

The game will come to PlayStation 4, Xbox One, PC, and Nintendo Switch on Oct. 16, and Star Fox will be an exclusive character in the Nintendo Switch version. You can build your own space crafts and take them into epic space battles, with Star Fox at the controls on Nintendo’s hybrid console.