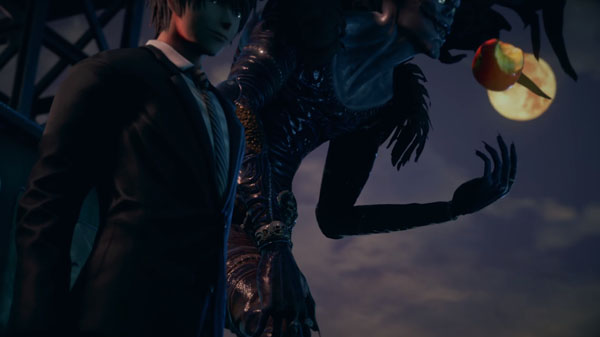 Bandai Namco’s upcoming anime-based fighter, Jump Force, previously teased us with a reveal featuring characters like Goku, Naruto, and Luffy from Dragon Ball Z, Naruto, and One Piece, but two familiar characters from another series: Death Note. We see familiar faces in the form of Ryuk and Light Yagami from the show, but we weren’t quite sure if they would be a big part of the game or not.

There’s a new trailer out featuring the duo, which show off a little of what they can do, but don’t get your hopes up, as it doesn’t appear that they’ll be playable, thanks to Bandai Namco’s PR manager Nick O’Leary. He’s since stated that the duo will only be important to the game’s story, and won’t be available for fans to take on the role of. It’s disappointing, but also makes sense, considering it might be more than a little difficult to involve a character like Light, especially, in a fighting game, when all he can really do is write someone’s name down in a notebook to kill them.

The trailer is still an intriguing one, especially if you’re into Death Note, and it gives us hope for the future that we might potentially see some sort of awesome Death Note-related game in the future. We can still dream, right?