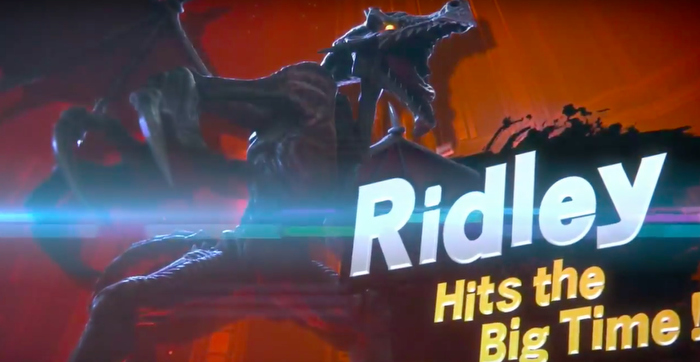 Samus’ long time foe Ridley has been confirmed as a playable character in Super Smash Bros. Ultimate, and Nintendo has provided a trailer teasing what the Space Pirate commander will bring to the battle.

In a new trailer shown during Nintendo’s E3 press conference, Ridley is shown as a fast moving heavy able to go toe-to-toe with the series’ mainstays. Rending through enemies with fang and claw, and soaring high above stages with aerial movement, he proves a legitimate threat to even the most seasoned player. The terrifying beast can also summon a metered into the fray, binding and damaging opponents so long as he escapes from its path in time.

Ridley will also come in both his original fully organic variant as well as his cybernetic version as playable costumes, each offering small details from the respective titles that featured him.

Super Smash Bros. Ultimate is set for release on Dec. 7, 2018 on Nintendo Switch. For more on all of the announcements made about the game at Nintendo’s E3 2018 press conference, including who’s included in the game’s massive roster, check out our piece covering all of the most recent news on the hotly anticipated title.