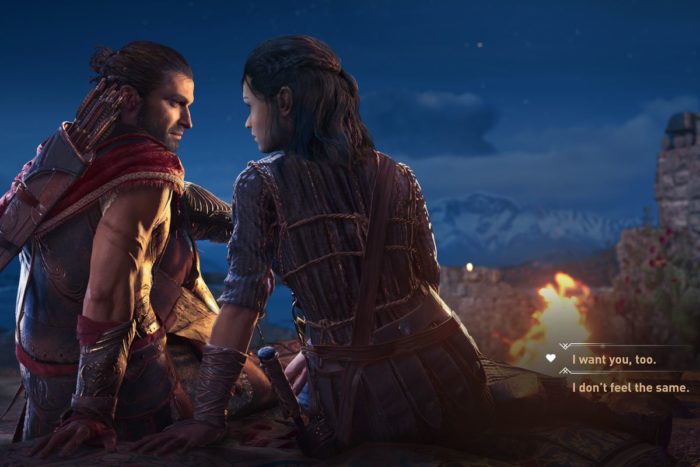 The next chapter in the Assassin’s Creed franchise will deliver an even more RPG-centric experience which includes branching dialogue and romantic relationships. We spoke with Ubisoft at E3 2018 and asked them to detail exactly what sort of depth we could expect to see in Odyssey with respect to these relationships. Here’s what we were told:

“When we were looking at this game and creating this story I was initially hesitant to embark on a romance because AC has featured romance in the past and that has always been part of the main story. We had to consider how different it would be this time given that choice was going to impact the narrative (to such an extent). We had to have a lot of discussions around the narrative and said, well you know, romance is a part of life… and it is! Romance in Odyssey is not a core feature but it is very much a part of the life you’re going to experience for yourself – the Odyssey that you’re going to go on. If you want romance to be a part of that there are a handful options in terms of people you can romance, but also people you can have sexual encounters with but not necessarily romance. It is really about you defining your experience.

So yes, we feature romance as an option for people, and there will be options for you. It doesn’t matter who you are, there will be an option that suits you. It was important for us to be able to speak to players on a wide range of topics, and romance was one of them.”

You can check out our full Q&A here, in which we go into further detail about Odyssey’s RPG mechanics, gameplay, story, and more. The game will launch later this year, Oct. 5.