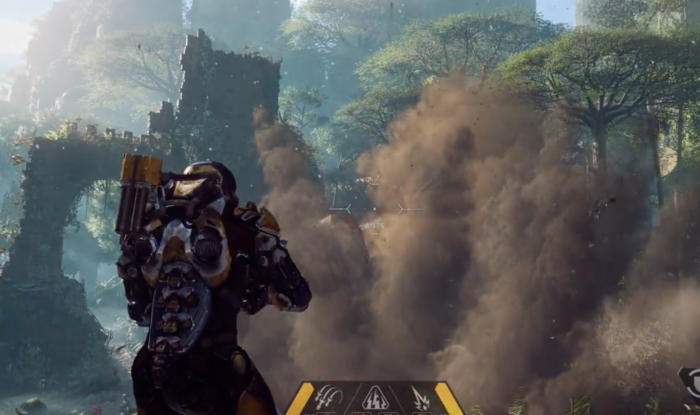 Today, at EA Play 2018, the company released new details regarding Anthem, Bioware’s upcoming title. While Anthem was teased at the very beginning of the conference with an interesting, if brief 3D scene showing two characters fighting a large behemoth full of crackling energy.

The new story shows off a lot of story elements. The game follows the player in an attempt to defeat a mysterious enemy. The conference took a deep look at Anthem, with three of the developers looking far into the game. The game has been described as dynamic and changing. Not quite like an MMO game or a Multiplayer game, but a deeper shared world. While the world itself is a multiplayer experience, the main results of your actions are experienced in the single player areas, such as bases.

The world has been described as highly dangerous, with storms, monstrous creatures, and a deadly environment that requires the Javelin, a suit of highly protective powered armor.

The player is a person known as a Freelancer, someone who goes out into the world and fights the enemies of humanity. The Freelancers are fighting to protect the Anthem of Creation, the mysterious otherwordly object keeping humanity alive.

Cosmetic micro-transactions are available, but they are not tied to lootboxes. Instead, each purchase is something you buy on an individual basis.

“Anthem is really built around trying to combine the impact of having your own personal story with the fun of playing with other players.” They said.

While it is not impossible to play alone, solo has been described as potentially more difficult without the full four person team.

The trailer, which showcases a lot of Game Engine footage, is available here.

Triumph as one. Anthem comes out February 22, 2019 on PC, Xbox One, and PlayStation 4. #AnthemGame pic.twitter.com/nnvz53kozG

They also released gameplay footage, which showcased the mission Scars and Villainy, where the Scars, an enemy force, are producing a powerful acidic weapon. The mission is simple: find the origin of the weapon and take it out.

The gameplay showcases gameplay of the four javelins, the Ranger, Colossus, the Interceptor, and Storm. You can check it out below.