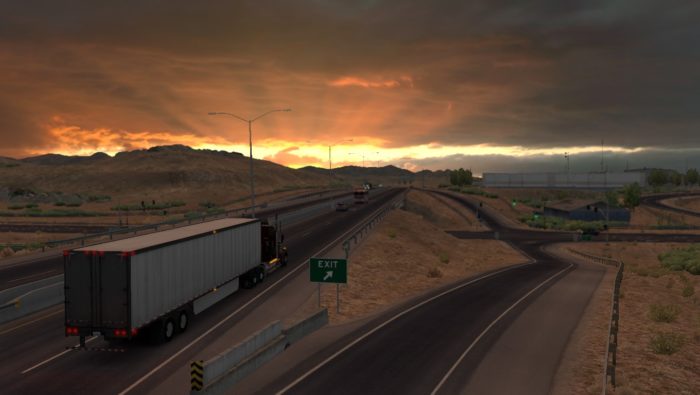 The road can be a lonely place for a truck driver. Long, empty expanses of nothingness as far as the eye can see, with nobody to talk to except that leprechaun that appears on the rearview mirror every now and then. And he’s no help, he just tells you to burn things! Augh, if only there was something nicer to distract you.

At last, a modder has stepped in to provide us with the eye candy we have so longed for, with an adjustment to the graphical quality of American Truck Simulator that overhauls light flares, raindrops, and yes – even the very sky itself. That ought to shut that smartass leprechaun up!

Part of the charm of driving cross-country through the beautiful landscapes of the United States in 2019 is admiring the fauna and vegetation that frequent through the American heartland.

Don’t settle for subpar visuals in this regard or you’re selling yourself short.

Enhanced Vegetation by Slavsan93 tweaks the vegetation across many states that you’ll be frequenting and even makes some other background visuals, like the ocean, look a little better as well.

The United States has one of the most varied and beautiful countrysides in the world, make sure they are looking as picturesque as possible.

Corporate branding is rarely a welcome sight, but when one considers the importance of immersion, it can make a lot of sense – so feast your eyes on this mod that will bring branding to your humble American Truck Simulator experience. Walmart hauls whiz by, while you can’t help but be mesmerized by the optical illusion of the FedEx arrow.

It even goes so far as adding car company logos to the vehicles, an especially nice touch. Now you can argue insurance claims over clipping a luxury sedan in digital form!

Another mod by Slasan93 that you should pair with Enhanced Vegetation to make your ATS experience as pretty as it can be.

As we mentioned before, America isn’t called America the Beautiful for nothing. It has a varied landscape which includes one of the biggest mountain ranges in the world, the Rocky Mountains, in addition to other ranges that dot the country.

New Mountain Textures will make them look as pretty as they possibly can.

Now that your truck has a real American logo, why not load up with some real American gas? This American Truck Simulator mod will change all of the in-game gas stations into real-life equivalents. Swing by the Shell station and top up, or plow recklessly into the BP while shouting slanderous remarks about the destruction they’re causing to the ecosystem, your vehicle combusting in the ruckus and sending fragments flying every which way.

The modern American trucker demands knick-knacks. Knick-knacks, dammit! And (Sideshow) SiSL has provided, gifting us with a wealth of trinkets to adorn our cabin with.

This American Truck Simulator mod is simply enormous, with hundreds of items on offer. So substantial and celebrated it has become, it even has its own Facebook page; an excellent way of keeping up to date if you’re a fan. Make sure to check out the sweet Star Wars swag!

Sick of getting discounted gas prices regardless of your location? Of course you are – you hate value, admit it!

This mod adjusts the cost of gas depending on your location in American Truck Simulator, updated daily to reflect the current rates. Revel over the low costs in Oklahoma, while lamenting your dwindling dollar when you venture to California. Getting gas as you arrive in Hawaii gets you nothing but bewildered stares, because how in god’s name did you drive to Hawaii, friend?

We love our oil and gasoline here in the United States. One of the most bad ass trucks you’ll see on the road are the massive gas tankers you’ll see populating iconic roadways where the substance is normally transported.

Advanced B-Train Tankers by Harven, Zetor165Maxterra, Ventyres and Trayscapes adds a variety of huge tankers for you drive for yourself.

In addition to being just fun to own, they models look great and very realistic. Definitely a must own mod for ATS if you’re a fan of these tankers.

If you’re going to drive like a trucker, you’ll have to suffer like one. Besides the punishingly long hours and an ability to only tan on one arm, one of the greatest hazards you’ll face is inclement weather. Though American Truck Simulator does have rain, this mod will ramp up the stakes, making it even harder to see. Good luck out there!

Also, we can’t help but think it troubling that a mod that increases the danger of your navigation is made by a person called ‘misguided’. That’s surely not a good sign at all.

If the Simpsons is to be believed, drivers go fastest through a yellow light – so an American Truck Simulator mod that prolongs its duration can only be a good thing.

With the longer yellow light mod in action, the duration of that telltale amber will be extended from 2 seconds to 4.5, allowing you just the margin you need to avoid running the red and getting hit with a pesky fine. In a game that is all about timing and efficiency, the importance of this cannot be understated. The only way it could be improved is if there were no red lights for you at any point whatsoever, but we’re pretty sure that’s illegal, and our lawyers have advised us not to speak of the matter any further.

Exactly as advertised: this will improve the visual accuracy of headlights, allowing you to see a lot better than is possible in the base version of American Truck Simulator.

If you’re a stickler for details, you’ll get a kick out of this mod that allows you to import actual tire models into American Truck Simulator; Michelins and Goodyears of all shapes and sizes to help things seem that little bit more wheelistic.

It’s even compatible with various trailer mods, but keep in mind that the wheel pack must have top priority in order to override the wheels present on the trailers. Good rule of thumb, really, for your wheels to take top priority.

If you’re up for a challenge, maybe you should take on a real heavy load. And we’re not talking about the crippling weight of your emotions (nobody’s ready for that), but an entire damn truck. That’s right, we heard you like trucks, so we put a truck on your truck so you can truck while you truck.

The Caterpillar is an iconic vehicle, and this mod will allow you to lug it from place to place in American Truck Simulator. Keep in mind, it’s a wider load than any other in-game, so you’ll have to stay sharp if you don’t want to end up plowing into the side of some hapless motorist foolish enough to change lanes in your presence.

Note that this mod requires the Heavy Cargo Pack DLC, most likely because this is indeed heavy cargo. 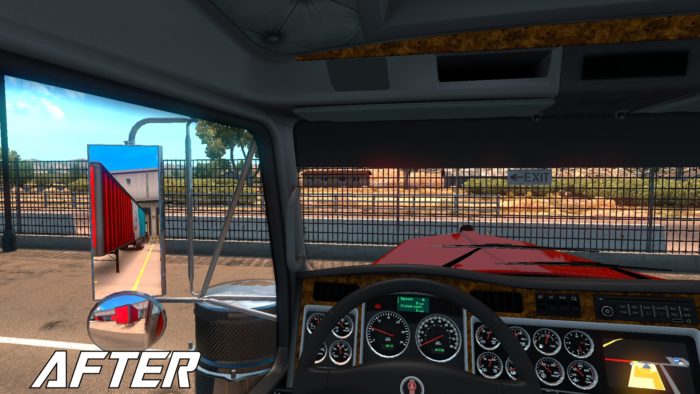 So you’ve got your realistic headlights, your realistic wheels, and your realistic logo like the sellout you are. You look in the rearview mirror, and you see… well, behind you, but not a particularly accurate version of it.

Never fear, aspiring trucker, for this mod will adjust the field of view on your mirrors to create a more believable reflection. It only applies to the main mirror, but the difference is quite striking.

You know a mod is good when it integrates the euro sign so seamlessly into its title. KilRoY66, you’re going places.

With so many mods catering towards the aesthetics of American Truck Simulator, there is a definite dearth of content meant to actually help make things easier for you. That’s where this one comes into play, boosting the income from rewards and lowering the cost of tickets by about 20%-30% – nothing that will break the gameplay, just nudge your piggy bank in the right direction. It also increases your XP gains, just for good measure, so let the good times roll.

This mod adjusts the behavior of the other cars on the road, increasing the traffic density during peak hour, boosting the number of motorists overall, and even making the suckers merge with reckless abandon. They’ve got places to be, after all, and they don’t want to miss the season premiere of Stranger Things.

In addition, the police spawning points will be adjusted depending on which state you’re in. If you’re not careful, that may end up being a state of panic. 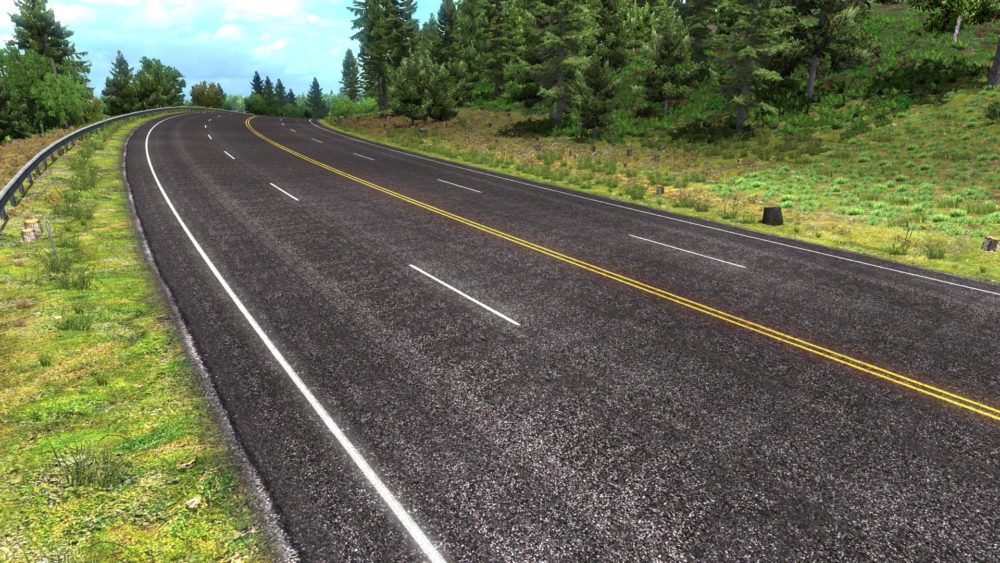 One last one from Slavsan93 who has spent a ton of time making ATS as pretty as it can be. This time, we’re addressing roads.

You’re going to be spending a lot of time on the roads obviously, so might as well make them look as good as they possibly can.

Realistic Roads does just that. It replaces the textures with better ones based on real-world pictures.

It’s never a good idea to distract the driver, and nothing is more confounding than superfluous data being thrown at you every which way. Get out of my face, fatigue meter, I’ve got a truckload of heroin I have to get to New Mexico by 3 pm!!

It’s a true blessing, then, that a mod exists that can tuck away all of your data right at the bottom of the screen. So simple, so sleek, nothing else to draw your attention away from the road up ahead.

It’s been a hard day’s night and you’ve been working like a dog – which generally means that you sniffed a lot of butts and buried a moldy bone in the backyard. But we won’t judge.

If there’s one way to really make it feel like you’ve put in a solid shift in American Truck Simulator, it’s with the visible passing of time, or more specifically, passing of time that reflects the real world. It takes into account your current location and the time of year, in order to give you that perfect Colorado sunset. Time at long last to get some shuteye!

This mod is for big time trucker fans. The Volvo VNL 670 mod by Aredeth is an extremely popular mod that adds a popular truck to the game that many players enjoy using.

It’s an extremely simple mod, you just download it, look for it in the Volvo dealers and away you go driving one of the best looking and spiffy trucks you’ll have the opportunity to drive in the game.