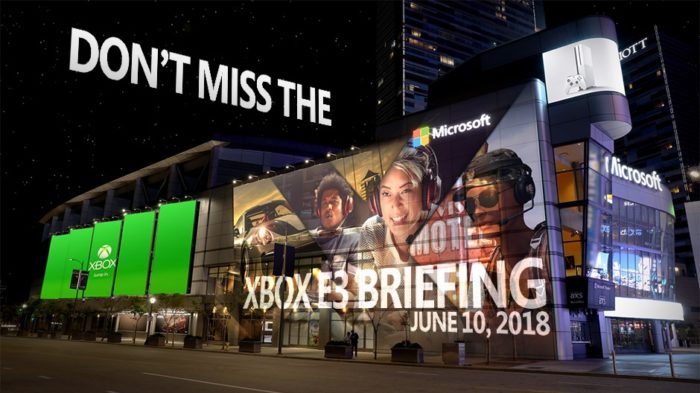 Today via Xbox Wire, the Xbox team broke down what to expect from Microsoft/Xbox One this year at E3. They didn’t spoil any of their big surprises yet of course, but it does walk you through the order of events for the week. And, if you want to read into things, maybe teased that they will be revealing a new battle royale game.

The briefing will be on on Sunday, June 10 at 1:00 p.m. PDT, as usual a few days before the show floor of E3 opens up. That’s where we’ll see what the Xbox One has in store for fans for 2018 and beyond. Hopefully they bring it with some enviable exclusives.

Microsoft Theater is where most of the action will take place this year. Anyone with an E3 badge will be able to stop by during the normal expo hours and demo what Microsoft is bringing this year which, if past experience is anything to go by, will likely include both announced, and still to be announced games.

Finally, Xbox Wire also shared what Mixer’s plans for the show are, and there’s something pretty interesting towards end at this paragraph:

“Mixer is the best place to catch all of the action from this year’s E3. From Saturday, June 9 to Friday, June 15, tune in at www.mixer.com for the latest news, gameplay, exclusive interviews and more. For fans attending E3 in person this year, we’ll have a dedicated Mixer booth located in the South Hall of the LACC, where you can get hands-on with new titles, watch the live broadcast each day, and catch your favorite Mixer Partners streaming live from the show floor. We’re also happy to announce a special showing of HypeZone Live featuring a new battle royale experience. Players can compete to see if they can make it into the HypeZone and walk away with some sweet swag.” via Xbox Wire.

Now, that could totally just mean a new way of experiencing battle royale games through Mixer. But… if we want to put our tinfoil caps on, that could also have been a sly way of saying that Microsoft might be showing off a new battle royale game this year at E3. Given the current market, it would certainly be in the realm of possibility.

We’ll find out in a few short weeks.