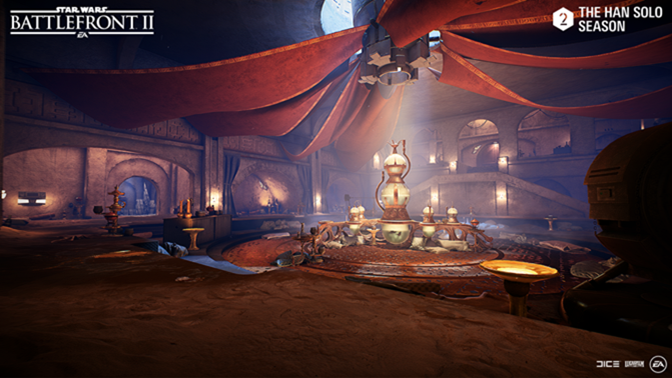 Gearing up to go see Solo: A Star Wars Story? There’s a whole lot going on in Star Wars Battlefront II on the gaming side, which should give you plenty of distractions while waiting it out to see the upcoming Star Wars flick. The game is traveling back to the original trilogy before it introduces a slew of new stuff this June, so there’s plenty to see on the way.

Starting May 16, you’ll be able to head to Jabba’s Palace in Blast, Hero Showdown, or Heroes vs. Villains to duke it out in Jabba’s home. And speaking of Hero Showdown, that’s new — the round-based elimination mode will find players taking character duos into two on to battles. Once you conquer one duo for one round, you need to switch to another for the next round.

There’s also a new selection of Appearances that you can purchase for Crystals or Credits. You can get Lando Calrissian in his Skiff Guard disguise, Leia in bounty hunter Boushh’s ger, and additional voice-over lines as well.

Lastly, you can put your pilot skills to the test in Starfighter Custom Arcade. You can hop in Starfighters from all eras of Star Wars, from TIE fighters to the Millennium Falcon.

If you’re a Star Wars fan or just want to go back to the original trilogy and spend some time, you won’t want to miss out on this upcoming Solo-themed update.