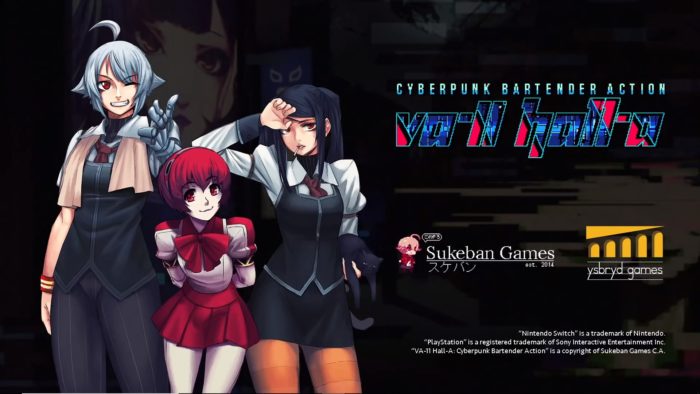 Developer Sukeban Games has announced via a new trailer that its acclaimed visual novel Cyberpunk Bartender Action: VA-11 Hall-A is coming to PS4 and Nintendo Switch in 2019.

Dubbed a “booze-em-up,” VA-11 Hall-A is a visual novel game first released in 2016. You play as Jill, a bartender at a dive bar known as VA-11 Hall-A, tucked away in away in an obscure little corner of the massive, corrupted dystopia known as Glitch City. In this grim future, civil unrest, a collapsing economy, a corrupt government, and nanobot surveillance is grinding society down. For many, escape lies at the bottom of a glass, and that’s where you come in.

It’s your job to fix drinks for your clientele and listen to their troubles as they open up to you, slowly piecing together their own stories, which also serves to flesh out the lore of the game’s universe. Gameplay largely consists of diligently following instructions in order to make the best drink possible for your customer (though there can be multiple options at different points), reading through a great deal of dialogue, and making sure you balance your spending to ensure that Jill can pay her bills and be happy enough to focus on customer’s requests while at work. Over the course of the game, you’ll come to know your regulars and colleagues, and Jill’s own story unfolds as these relationships are forged.

No word has been given on a release date of any sort, though we’re pretty sure it’s likely to only release as a digital download. Cyberpunk Bartender Action: VA-11 Hall-A is available now for PC and PlayStation Vita.

Just think, maybe we’ll finally get a Switch game that actually uses the HD rumble for ice cubes in a glass!

You can watch the new trailer for the game below: