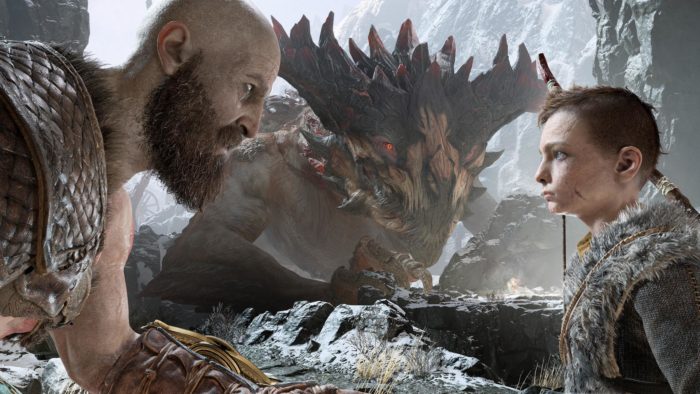 God of War’s story starts with the death of Faye, Kratos’ wife. We never really get to see Faye, and we simply see Kratos and Atreus gathering wood for a pyre, where they burn her body. It is revealed that Faye’s final wish was for Kratos and Atreus to scatter her ashes from the highest peak in all the realms, and that’s exactly what they intend on doing. This is pretty much the main goal of the game.

As they burn Faye’s body, Atreus quickly grabs his mother’s knife from her body. After that, they begin setting off on their journey to the mountain peak of Midgard. However, before the journey starts proper, a Stranger attacks Kratos at his house. He clearly isn’t mortal as he possesses superhuman strength like Kratos. The two engage in a heated battle before Kratos finally manages to beat him and toss him off a cliff, presumably killing him.

Along the way, the meet Brok, a blacksmith dwarf who notices the Leviathan Axe on Kratos’ back. He tells Kratos that he and his brother were the ones who forged the Axe, and that he can upgrade it for him. We also learn that the Leviathan Axe originally belonged to Faye, and the dwarves had crafted it for her.

Kratos and Atreus continue on their journey, and they decide to hunt a boar along the way. However, Kratos soon loses track of Atreus while tracking the animal, and he gets lost in fog. When he finally finds Atreus, it turns out that the boy had shot down a magical boar, and a witch appears to confront them and forces them to help her save the animal.

The witch introduces herself as Freya after Kratos and Atreus gather the herbs needed to help the boar. Freya then offers them her boat to sail to the Lake of the Nine, where they soon encounter the World Serpent. They also meet Sindri, Brok’s brother, at the foot of the mountain before they make their way up.

However, they soon encounter a road block at the mountain. Some sort of black fog called the Black Breath blocks their way. Freya shows up and tells them that they need the Light of Alfheim to dispel it.

The Light of Alfheim

Kratos and Atreus head back to the Lake of the Nine, where Tyr’s Tower is. From here, Freya teaches them how to use the tower to travel to other realms with a tool called the Bifrost. Once in Alfheim, Kratos and Atreus start exploring the realm to look for the Light, while getting tangled up in a conflict between the Light and Dark Elves.

They eventually find the Light, and Kratos steps into it to power up the Bifrost. After taking the Light, they are then able to return to Midgard. Now that they have the Light of Alfheim, they’re able to dispel the Black Breath and make it into the mountain.

However, as they approach the summit, they overhear the Stranger talking to someone named Mimir, whose body has been trapped in a tree and tortured by Odin for years. The Stranger is revealed to be Baldur, Odin’s son, and we learn that he’s trying to track down Kratos and Atreus. He’s also accompanied by Magni and Modi, his nephews and the sons of Thor. When Kratos talks to Mimir, they find out that the tallest peak isn’t actually in Midgard, it’s in Jotunheim. Mimir says he can take them there, and Kratos chops off his head, then takes it to Freya in the hopes that she can reanimate it, and Mimir can join them on their journey.

Freya manages to bring him back to life, and we also learn that Freya is actually a goddess of the Vanir. Mimir tells Kratos to go talk to the World Serpent at the Lake of the Nine to figure out a way to Jotunheim. The Serpent reveals that in order to get to Jotunheim, they need a travel rune and a piece of a magic chisel to carve it with.

They eventually get the magic chisel, but not before having to fight off Magni and Modi. While they did manage to kill Magni, Modi was able to run away before Kratos could finish him off. Now, they just needed the travel rune.

However, before they could get the rune, Atreus falls ill. Kratos takes him to Freya, hoping that she can do something for him. It is revealed that Atreus is falling sick because he’s a god who believes he’s a mortal, and the lack of knowledge is tearing him up inside.

Anyway, Freya tells Kratos that he needs to obtain the heart of a gatekeeper from Helheim, but his frost axe won’t be effective against the enemies there. Kratos then goes home to “dig up his past.”

Kratos takes Freya’s boat back home, and on the way there, he is haunted by visions of Athena from his past. She reminds Kratos of who he really is, and how he can never escape his origins and role as the God of War. Kratos seems to understand this, but he ignores her as he digs up his Blades of Chaos from the floorboards at home. Now, he’s finally ready to go to Helheim.

Kratos manages to obtain the gatekeeper’s heart easily enough, but he also finds himself haunted by visions of Zeus, his father. He’s reminded of the fact that he had killed his own father, and Mimir (still attached to Kratos’ belt) also learns of Kratos’ origins.

Finally, Kratos returns to Freya’s house and they’re able to save Atreus. Before setting out once more, Kratos finally reveals to Atreus that he’s actually a god, and that makes his son one as well. Atreus also realizes that not knowing that he was a god was making him sick this whole time. After they get all that out of the way, they head back to Tyr’s vault to try to find the travel rune. However, there’s now a slight change in Atreus’ behavior. He’s a lot more cocky about his abilities, and he begins to act even more obnoxious and interacting with other people.

They eventually find the travel rune, and they head back up to the summit to try to open a path to Jotunheim. Not everything goes according to plan, though, as they encounter Modi once again. Modi starts trash talking Faye, and this makes Atreus angry. But even as Kratos tells Atreus not to kill a god who’s already been beaten, he refuses to listen and kicks Modi off a cliff anyway. This makes Kratos mad, and he tells Atreus that there are consequences to killing a god, and he has to be better than that. Atreus refuses to listen, and they continue heading up to the summit.

At the summit, they’re attacked by Baldur once again. In the process, Kratos accidentally destroys the pathway to Jotunheim, and Atreus blames him for it. All three of them are then sucked back into Helheim.

Finding Another Way to Jotunheim

Back in Helheim, Atreus finally starts to show some remorse for being so cocky about being a god. While trying to find a way out of Helheim, they also find Baldur once again, and we learn that Freya is actually his mother. Freya had given him the gift of immortality, and this caused Baldur to resent her. Baldur told Freya to get out of his life, but resolved to kill her if he ever saw her again.

Before heading back to Midgard, Kratos sees a vision of Zeus once again, and Atreus sees it as well. When they finally get back to Midgard, Brok and Sindri help them in making a key to access Tyr’s vault, where they try to find an alternate path to Jotunheim. They eventually figure out that they have to flip Tyr’s Tower itself in order to get a Unity Stone, which allows them to travel between realms.

While in between realms, they discover a new travel tower which can take them directly to Jotunheim. However, there’s another snag in the plan. They can’t go there quite yet as they need a travel crystal, similar to Mimir’s one eye. They talk to the World Serpent again, who tells them that he swallowed a statue which might contain a hidden compartment containing Mimir’s missing eye. Kratos, Atreus, and Mimir then sail a boat into the Serpent’s mouth to find the eye.

They manage to find the eye, but on their way out, they find that the Serpent is under attack. When they finally get out, we see that Baldur had attacked the serpent to flush them out. Freya also shows up to try to stop them from fighting.

In the end, Atreus manages to break Baldur’s immortality spell by injuring him with mistletoe, and Kratos is able to kill him before he kills Freya. However, Freya clearly isn’t happy about this. She takes Baldur’s body away, and she no longer regards Kratos as an ally. Anyway, they can finally go to Jotunheim now.

When they finally reach Jotunheim, Kratos spots a mural on the wall which contains drawings of all the adventures he and Atreus had had up to this point. We learn that Faye herself was actually a Giant, and it’s implied that she and the Giants knew that Kratos and Atreus would embark on this adventure together, and eventually come to Jotunheim to learn about her true identity. This makes Atreus half-god and half-Giant.

After they finally scatter Faye’s ashes to the winds, Kratos also tells Atreus that she had originally wanted to name him Loki.

This is officially the end of the God of War story, but if you choose to head back to Kratos’ house, we get treated to another optional cutscene. Kratos and Atreus are shown going to bed at home, and we see a time jump of a few years. There’s lightning and thunder everywhere, and a hooded stranger is shown standing outside their house. We see a metal hammer on his belt, implying that this is Thor, who’s presumably here to settle the score with Kratos for killing his sons and brother. The credits roll, and Kratos and Atreus wake up, dismissing it as a premonition they can deal with another day.

Be sure to check our wiki for more information on God of War.