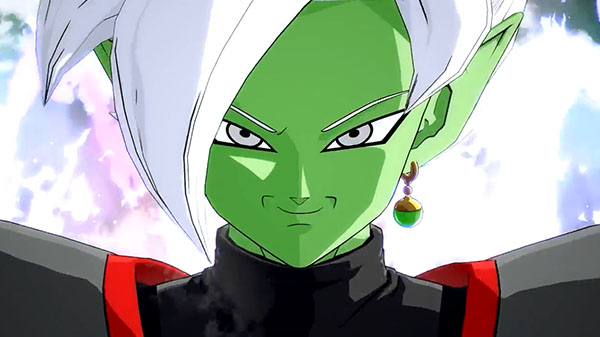 Bandai Namco knows we’re all chomping at the bit to see more of Dragon Ball FighterZ’s latest character Fused Zamasu, and so a new trailer showing off exactly what he’s capable of has been released to the masses. Instead of looking over screenshots, now there’s a video accompanying his royal Chaos, which you can check out below.

The new downloadable content character is the fusion of Goku Black and Future Zamasu, by way of using the Potara earrings. The Super Dragon Balls have given this new character the power of invincibility, so he’s an even more formidable opponent than before, capable of some pretty devastating power. He can float in the air and move in any direction, and then bring his Ultimate Attack, Divine Wrath, down on his enemies’ heads with a flourish. It’s shot out from his fingertip and can follow up a well-timed rush attack for skilled players.

Fused Zamasu’s Ultimate Attack Divine Wrath, is a huge shot from his fingertip and is best used after a rush attack. There isn’t a date yet for when we can expect to see him in the future when he releases, but he’ll be available on Xbox One, PlayStation 4, and PC if you’re ready to give him a spin. He looks like he could pretty much take anyone, though, so beware!