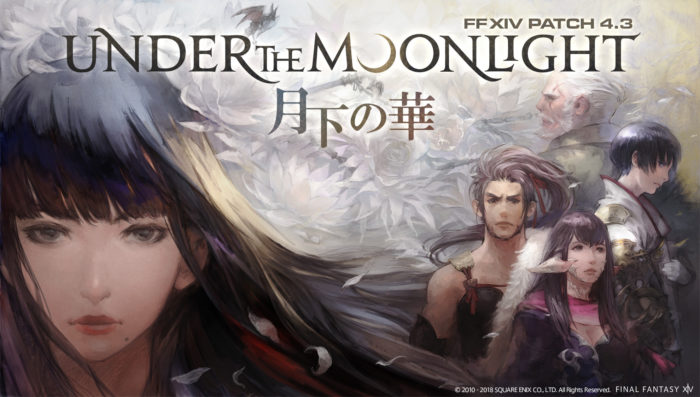 Square Enix has today unveiled a micro-site detailing some information on the upcoming Patch 4.3 for Final Fantasy XIV Stormblood, Under the Moonlight. In addition to a synopsis teeing up the all-new dungeon and storyline, we’re given a sneak peek at its aesthetic thanks to some gorgeous high-resolution images.

From what we know so far, the patch will feature a new main scenario, as well as a brand new dungeon called the Swallow’s Compass.

Under the Moonlight’s description is as follows:

The arrival of imperial envoys in the land of Doma was as unexpected as their stated purpose: to negotiate peace. Lord Hien, eager to secure the release of his conscripted countrymen, cautiously accepts the agreement and arranges for a prisoner exchange. Yet even as Doma is poised to welcome the breaking dawn, the shadow of the fallen Zenos enfolds all in darkness and uncertainty.

The new dungeon, meanwhile, is described as an area chiseled into the great wall which cuts across the plains of Yanxia. Here, adventurers will also be able to take on new Trials and level up their crafting and gathering skills by accepting the new Namazu Beast Tribe Quests.

Chiseled into the great wall which cuts across the plains of Yanxia, between two of the Dairyu Moon Gates, is the visage of Ganen, the legendary hero who united Doma. The first king of the new kingdom was not only a military genius, but also the founder of geomancy, and so after his death, this royal mausoleum became a holy place to which his disciples would make the pilgrimage. Alas, following the imperial invasion, it was abandoned and fell into disrepair, yet circumstances now conspire to deliver the Warrior of Light unto these hallowed halls─but to what end?

You can check out all the new images for the patch below:

A release date for Final Fantasy XIV Under The Moonlight has not yet been confirmed.