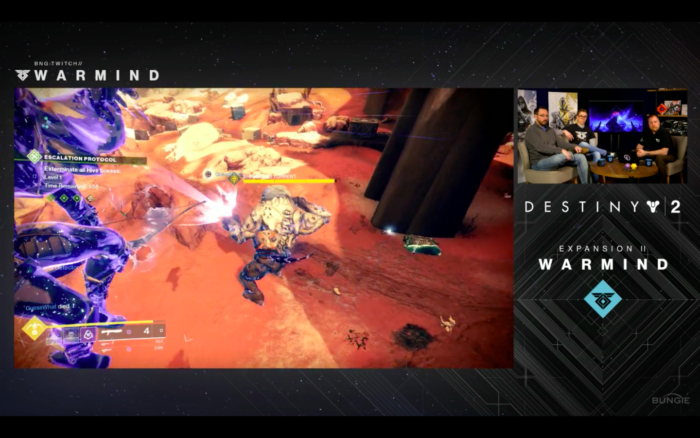 During the Destiny 2: Warmind reveal stream, Bungie showed off a new end game activity that is designed to be a response to feedback that the game is too easy: Escalation Protocol.

It is described as a public event that can be started at any time, and will be the most challenging public activity to-date. Although it’s technically a really long public event, it has more in common with House of Wolves’ Prison of Elders, however it’s not exactly the same thing.

Players that have completed campaign can start these events that take place on Destiny 2’s version of Mars, up on the red planet’s polar ice caps. Escalation Protocol will feature a new icy version of the familiar Hive enemies. They seem nastier, and all look like they are wearing a mean-yeti skin over their old look.

Rasputin will be driving the hive to your location, and you’ll face up to seven increasingly challenging waves that will require you to navigate around the planet. There will be special weapons that you can pick up, such as the return of the Hive Sword, to help you clear out the waves.

Waves three and five will drop public event chests that offer familiar rewards, but the real prize is on wave seven. This wave will introduce a boss enemy that will reward players with exclusive end game loot. Each week, this boss will rotate (sort of like the old Prison of Elders and Court of Oryx bosses), and each will offer up different exclusive loot. There will be a total of five bosses that will be on a set rotation.

Although we didn’t learn the specifics on the loot, expect Rasputin themed weapons and armor as rewards for your efforts.

Destiny 2: Warmind will be out on May 8 for PlayStation 4, Xbox One and PC.