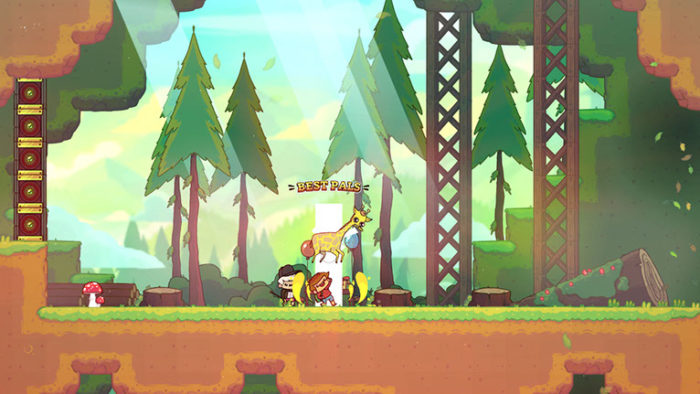 On March 22, Armor Game Studios released a Nintendo Switch gameplay trailer for their upcoming game, The Adventure Pals. The Adventure Pals is a side-scrolling platformer all about friendship and exploration. In the game, the player, aided by their giraffe and pet rock, tries to save their father from being turned into a hot dog. You can play the game by yourself, or as a two-player game with a friend.

In the trailer, we can see the player meeting Sparkles for the first time. If you’re playing co-op, player two will get a white giraffe. Based on the trailer, Sparkles appears to spend a lot of her time in the player’s backpack, with only her neck and head sticking out. While in the backpack, Sparkles can help the player jump and descend slowly by twirling her tongue like a helicopter. Sparkles can also use her tongue to yank the player towards enemies or towards hard to reach platforms. The player can also ride Sparkles, naturally.

In order to save their father, the player must overcome a variety of enemies, bosses, and environmental obstacles. There are five worlds for the player to explore, and 105 levels. Wacky antics that the player will encounter on their quest include choosing sides in the battle between a dinosaur and toast, helping a whale to regain its confidence, and affecting a Pirate election.

The Adventure Pals will launch on April 3rd for Xbox One, PS4, and PC. Shortly after, it will be released for the Nintendo Switch.