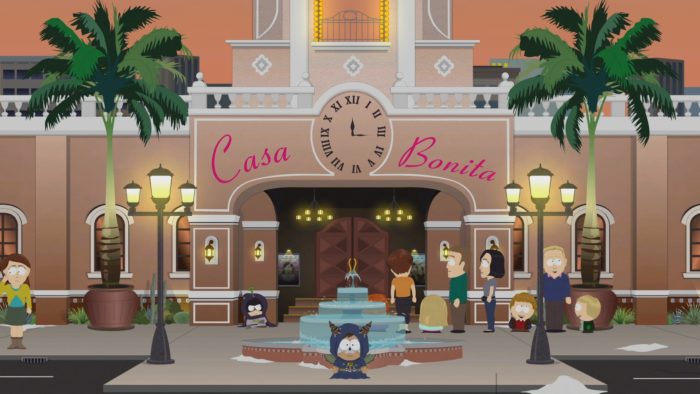 Ubisoft has announced the first story expansion for South Park: The Fractured But Whole, titled “From Dusk Till Casa Bonita.” The kids will be heading to the infamous eatery of Casa Bonita, featured many times on the show. Fun fact for anyone that doesn’t know, Casa Bonita is a real restaurant located in Denver, CO.

The expansion will add on a brand new story campaign and super hero class. From Dusk Till Casa Bonita will be out on March 20 for PS4, Xbox One, and PC and will cost you $11.99, unless you already have the game’s Season Pass.

Much of the new expansion will apparently be Goth themed, with Henrietta the Goth joining your party as a powerful support witch. The new class will be the Netherborn, which comes with four unique occult powers. Of course, you can use the new party member and class in the rest of the game if you want too. Here’s a breif overview of the expansion’s story, from Ubisoft.

“Mysterion’s sister is in trouble. She’s fallen in with the Vamp Kids of South Park, who have descended upon Cartman’s favorite restaurant, Casa Bonita. Visit the famous family eatery and explore Black Bart’s Cave, watch the cliff divers, taste the magic of Mexico and defeat the brood of Vampires.”

From Dusk Till Casa Bonita will be out on March 20 for PS4, Xbox One, and PC. What do you think of South Park: The Fractured But Whole’s first expansion? Are you excited to explore the halls of Casa Bonita. Let us know down in the comments below.