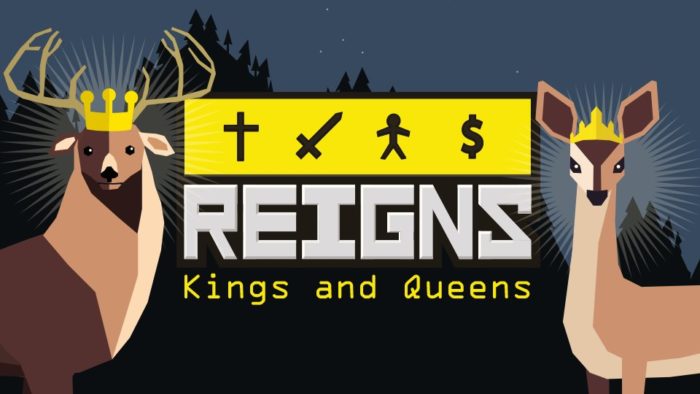 The game that lets you choose the fate of your Kingdom by simply swiping left and right, Reigns: Kings and Queens, will be joining the Switch line-up this Spring and will come with it, an exclusive local cooperative multiplayer mode not seen in other versions of Reigns.

Announced during the Switch Nindies Showcase, Reigns: Kings and Queens throws you into the shoes of a monarch of the modern age. Make influential choices, outwit and outlast those who want to overthrow you, and rise to power in your kingdom. Thanks to the simple local multiplayer that the Switch offers with its split Joy-Con, you and a friend can work together and make split-second choices.

You won’t have to wait long, since Reigns: Kings and Queens will be dropping onto the Nintendo Switch eShop sometime this Spring.

Reigns was originally released back in 2016 with its follow-up, Reigns: Her Majesty, releasing in December of 2017; Reigns for Switch will be a collection of both strategy titles, which were developed by Nerial and published by Devolver Digital.

If you missed any of the other announcements during Nintendo’s Nindies Showcase, make sure to check back here at Twinfinite for all of the news that you may have missed, we got you covered.